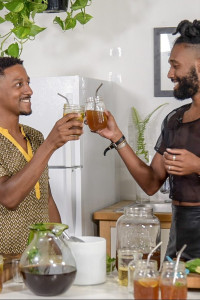 It’s a brave new world of filmmaking, and Open Television (OTV) has completed their first fundraising effort as a non-profit organization, securing near 1.2 million dollars. Founded in 2015 by Dr. Aymar Jean Christian, a tenured scholar and professor at Northwestern University and Elijah McKinnon, an award-winning strategist, artist and entrepreneur, OTV has been slowly and steadily building an internationally recognized media hub for intersectional artists in Chicago.

What does sustainable TV look like? What does intersectional TV look like? What does artistic TV look like? All of these questions served as the guiding questions for what began as Christian’s research for his first book, Open TV: Innovation Beyond Hollywood and the Rise of Web Television, an intimate examination of how the internet transformed the television industry. “We’ve seen historically that television’s investments in programming do not produce diversity. Even when people of color or queer people are on the screen, they are made acceptable to the masses in all these ways that really inhibit our vision of what people are like in America” says Christian.

In 2020, Elijah McKinnon (they/them) became OTV’s first Executive Director. Armed with nearly a decade of experience in media, business and non-profit industries, McKinnon set out an ambitious strategy to not only secure multi year funding for the organization but also position OTV as a leader in media representation, artist development and equitable pipelines to Hollywood while also expanding the intersectional platforms reach globally with it’s internationally acclaimed Brave Futures film competition and suite of TV apps available on Roku, Amazon FireTV, Apple and Android.

“I believe that OTV is uniquely positioned to usher in a new crop of intersectional artists that are armed with the proper resources to navigate an industry that has exploited, compromised and silenced our extremely nuanced, lived experiences” says McKinnon. “The relationships and trust that we have been able to cultivate with our artists over the past years is finally being recognized as a change agent in the industry by foundations and that investment is truly priceless to Black and queer led non-profits”.

In a time when Hollywood is grappling with the daunting task of pivoting production in an unexpected pandemic while also being challenged to create a more equitable industry, OTV is uniquely positioned to thrive as an experienced leader in web TV and film production that prioritizes the wellness, safety and the bravery of the intersectional identities they represent. Further, OTV’s history of centering and celebrating LGBTQ+, and BIPOC artists and stories make them an essential voice in modern media making. These long term investments by the foundations listed above guarantee OTV’s future in revolutionizing televised media.