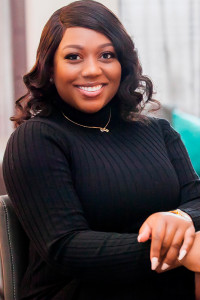 DOMINIQUE: This is my favorite question because I have some really great celeb stories. But that’s for another time. I would definitely have to say it was meeting President Barack Obama when he was an Illinois State Senator. I was in high school running to catch a bus on the other side of the terminal when I bumped into a tall man who was wearing a suit and a long black coat. He was standing in the middle of the terminal introducing himself, shaking hands, and encouraging people to vote. Chicago is really cold in the winter so stopping to talk to someone is highly unlikely, especially when you aren’t old enough to vote. As I ran alongside my friend Dorene, she halted and made us stop to say hello. I remember his really big smile, his voice and warm personality. We told him we were too young to vote but would when we could and ran along to catch our bus just in time. Who knew that the first time we would be eligible to vote would be to get him elected as the first Black President of the United States?

SCREEN: If you could be a member of any band/musical group in music history, what would it be?

DOMINIQUE: This is such a hard question! It is a close tie between the Jackson 5 and The Supremes! Both were so iconic and produced two of the greatest solo icons of all time. My love for Michael Jackson and Diana Ross are unmatched so I really can’t choose!

DOMINIQUE: I worked in door-to-door sales for a home security company during my summer break in college. Getting chased by dogs, aggressive homeowners, and 100-degree weather was the worst 2 days of my life. Yes, I quit after 2 days when I found out I had received an internship at not only a reputable company, but one that had AIR CONDITIONING. *cues dance break*

DOMINIQUE: No embarrassment here! Judge someone who cares! HA! I love binging just about anything on TLC. My faves are 600-LB LIFE and 90-DAY FIANCE. 600-LB LIFE gives me the underdog/ get your life back on track success story that I love to see, while 90-DAY FIANCE reminds me that if all else fails with love in the states, my true love could be the pen pal I never had!

DOMINIQUE: Cooking has always been my favorite pastime so when the “stay-at-home” order happened, I immediately turned to food. Birthed during the craziest time in most of our lives, I started a virtual cooking class teaching people of all ages and experience levels how to prepare delicious, restaurant quality meals. I have cooked with people not just from the U.S., but from all over the world including Ghana, Nigeria and Belize! The virtual classes have allowed me to find peace, purpose and happiness, while creating a community rooted in fellowship, friendship and love among strangers.

DOMINIQUE: “Success is not measured by the things you have accomplished, but the impact you have made in the lives of others.” I carry this really close to my heart and when I am feeling like I have not done enough, I think of ways I have helped or can help someone.

Click here for more rounds of Five Questions with SCREEN!