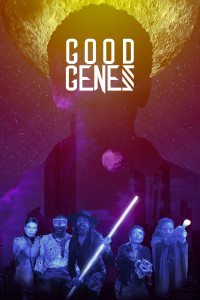 We can all be heroes. So say Michael Fry and Ashley Tribble, the creators of GOOD GENES, the wildly imaginative and intentionally inclusive sci-fi series that has been selected to the highly competitive lineup for SeriesFest, one of the premier international showcases and marketplaces for episodic content.

There is plenty powering GOOD GENES to shine amid the myriad of television pilots vying for network series orders. “The depiction of a black queer woman as a hero makes this pilot unique,” Tribble told SCREEN. “GOOD GENES posits and celebrates the forward facing idea that LGBTQI, minority and heroes aged over 50 can be entrusted to literally ‘save the world.’ In Western storytelling, sub-groups have traditional been side-lined as side-kicks, villains and jesters and the real ‘heroes’ have simply not been depicted as powerful or dependable enough to be entrusted with the safety and sustainability of our beloved planet Earth. Until now.”

Here is your fantastic first look at this promising sci-fi series:

On Earth, Tayla, a black, queer, fashion intern, is no stranger to being an outsider. But when her deadbeat father, Cirrus, shows up after 20 years and strange things start happening, she learns the nature of her true identity is not of this world.

“Now, he has finally found his Tayla in time to try to save her from the ENTIRE multi-verse. Tayla’s DNA, as a poly-hybrid, is literally the cure to a horrendous virus CYLAX, that is infecting the multi-verse. And recently, Earth. Some want her as the cure, some want her dead, some want to weaponize her. Cirrus just wants her to live.”

Looking Ahead to SeriesFest

Seriesfest enters its sixth season of championing artists at the forefront of episodic storytelling, while also providing concrete opportunities for filmmakers to take their shows to the next level. Tribble and her team are hopeful SeriesFest can vault this pilot ahead into the national spotlight. “SeriesFest was the festival we’ve been waiting to hear back from, and for me, since this is my first film, I am overjoyed about being accepted into the festival,” Tribble told SCREEN. “It feels special. It feels like an opportunity for more doors to open for me to tell the stories of queer people, black people, women and others whose stories are not widely represented.”

Series Producer Jacquelyn Jamjoom hopes to engage partners that have a genuine desire to make and promote content that smashes stereotypes while inviting everyone to the entertainment table. GOOD GENES has a little something for everyone,” Jamjoom told SCREEN. “It’s a fresh story with fresh faces. It’s packaged in a genre [Science Fiction] known for inspiring generations through imagination, innovation, and exploration of what our world could be. It will disarm you with laughter and move you with thought-provoking commentary. You’ll connect with themes about love, family, friendship, and the importance of believing in yourself. Buckle up because GOOD GENES is one ride you don’t want to miss.

Festivals have been enjoying the ride so far. GOOD GENES has played at four festivals this year heading into SeriesFest and has won at all four, including the coveted Best Short Film Award at its World Premiere at the prestigious 46th annual Boston Sci-Fi, the oldest genre festival in the United States.

From June 18-24, the acclaimed episodic showcase SeriesFest will go 100% virtual, as is the protocol under the current pandemic constraints. Click here to purchase your pass and support GOOD GENES in competition.