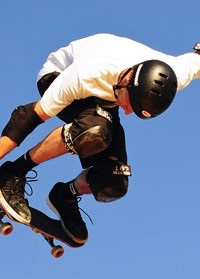 What is Tony Hawk’s favorite Tom Cruise movie? What was going through his mind when he hit that 900? And what about this new documentary of his that just released? Skateboarding legend Tony Hawk talks with Screen’s Katie LeClerc and Brett Davern about the new documentary PRETENDING I’M A SUPERMAN. This thrilling new film is available to watch now on all platforms, go to thpsfilm.com to link up!

The skateboarding industry was going through a major crisis in the early 90s, with popularity nosediving and the certainty of the skaters’ livelihoods unknown. But that was all about to change with the introduction of the X-Games, and the debut of one of the world’s most influential video game franchises. In 1999, the video game Tony Hawk’s Pro Skater shook the world when it sold 9 million copies upon release and changed the skateboarding scene forever. Complimenting the reboot of the beloved Tony Hawk Pro Skater 1 & 2 games in 2020, PRETENDING I’M A SUPERMAN tells the story behind the game that changed lives and shaped a generation.

From award-winning Swedish director Ludvig Gür and acclaimed videogame producer Ralph D’Amato, Pretending I’m A Superman is the story of the skaters and developers who came together to create the best-selling gaming franchise, as well as a look into how skateboarding became a part of the mainstream, and continues to influence modern culture.