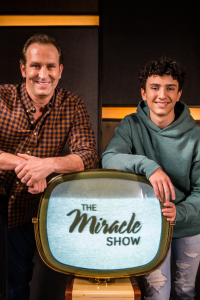 Heart, humor and humanity are coming to a new streaming service, Questar, this year with a Questar Original, THE MIRACLE SHOW. Filming in downtown Chicago and all over the country, father and son duo, Kevin and Gunnar Sizemore, are sharing real life miracles spanning from unexplained recoveries to impossible rescues.

“This is what the world needs now. It’s not just about uplifting stories, it’s also about family and community,” says Felicia, producer of The Miracle Show.

Though they have worked together before on films THE WORLD WE MAKE and INTENSIVE CARE, the father and son pair are hosting together for the first time. Kevin Sizemore is an actor, host and philanthropist, who has had a few breakout TV and streaming roles since being in the Emmy-nominated series, FEAR THE WALKING DEAD: FLIGHT 462. He recently starred in Questar Original Series, THE DARK: THE GREAT DECEIVER, which is exclusive on Pure Flix. Besides his appearances in countless shows from CHICAGO P.D. to WILL & GRACE, Kevin has a heart for showing up for people and giving hope to communities. A cause that is dear to him is working with at-risk youths. He’s a family man at heart and can always be seen supporting his son, and his wife, celebrity personal trainer, Gina Lombardi. He’s currently helping her promote a new podcast entitled HEALTH INTERRUPTED.

Gunnar Sizemore, his son, landed his first lead voice acting job at age 6 as the title character on a Disney pilot. He is known for his role as Micah Brenner on the tv series NASHVILLE and the voice of many beloved characters animated films and series such as BAO in KUNG FU PANDA: THE PAWS OF DESTINY and Jason in Emmy winning CRAIG OF THE CREEK. Gunnar is also an upcoming screenwriter and director.

“Anytime you can spend time with your son, especially at a time when he is growing up so fast, is a blessing. Being able to share other people’s stories and creating a wholesome good show, which I think that people need right now, is a bonus,” said Kevin Sizemore, co-host of THE MIRACLE SHOW.

What’s Next for Questar and The Miracle Show

Questar Entertainment, a 35-year-old business that pioneered the DVD industry, is now leading the way in streaming and linear channels. They launched their first linear channel and app, GoTraveler, in 2020 and have two more releasing this year. Known for inspiring and uplifting entertainment, they will be bringing other family friendly content to the Questar channel linear line-up including Chad Lowe’s and Kristin Davis’ TAKE ME HOME: THE JOHN DENVER STORY, Kieren Hutchison’s THE ADVENTURES OF SWISS FAMILY ROBINSON and Jane Seymour’s DEAR PRUDENCE.

The first series of The Miracle Show is currently filming, and Kevin and Gunnar are looking for miracles to feature. If you would like to submit your miraculous story, you can visit The Miracle Show.