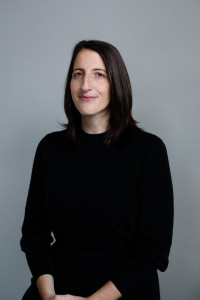 What do Tom Cruise, Olympic legend Kerri Strug, and PRINCE have in common? They are all taking center stage in this week’s round of Five Questions with SCREEN. The Gene Siskel Film Center opens back up on August 6th, and will do so with a new Director of Programming. Before opening the doors of the storied cinema house once again, Rebecca Fons stopped by for Five Questions with SCREEN…

REBECCA: My husband and I both love to travel, and have a tradition of being in far flung places for New Year’s Eve. One of our top NYE destinations was New Zealand. When it is wintery and snowy in Chicago, it is summer in New Zealand, so a bit of a cheat answer to this question, but absolutely one of our favorite journeys, full of hiking and beautiful scenery, outdoor adventures and time to unwind and relax. Nothing like being on the other side of the world to help you unplug.

SCREEN: With the Olympics right around the corner… what is your favorite Olympic moment?

REBECCA: I’m so out of the Olympics loop (no logo pun intended), so I’d have to say, very specifically: Kerri Strug’s performance at the 1996 Atlanta games. I was 14 years old and glued to the screen – transfixed by the high stakes, the patriotism, and Strug’s infamous vault performance. I had been a very poor gymnastics student in junior high, so I had a delusional – but sweet – sense of camaraderie with the athletes that year.

REBECCA: During my years at the Chicago International Film Festival, I had the pleasure of connecting with many talented, famous, infamous and soon-to-be-famous people, but my favorite celebrity interaction was not when I was on the job. I caught an advance screening of EDGE OF TOMORROW at the ShowPlace Icon back in 2014. I was invited, along with my Chicago International Film Festival colleagues, and we were tipped off that talent would be present at the screening. I am a true blue Tom Cruise fan – I’ve loved him, unabashedly, unironically, and deeply since I was a kid – so I was buzzing at the possibility that he would appear. Low and behold, the credits rolled, out he stepped and the audience went wild. After the screening, my then-fiancee and I lingered with my colleagues in the lobby, so by the time we left the theater the crowd was gone. As we walked past an emergency exit outside the building, the doors opened, and out stepped Cruise. Just him, a few security guards and us. I NEVER ask for photos, but it was Cruise! I asked, and he immediately put his arm around me and posed (major points go to my now-husband, who was ready with the camera). “My fiancé is right there,” I said, and Tom responded “Oh great, when are you getting married?” We chatted briefly about our upcoming nuptials (“May is a great time of year,” he noted) and then, in an instant, he was whisked into a black SUV and was gone.

SCREEN: With the Siskel Film Center opening back up August 6th, we have to ask, what’s your favorite seat at the Siskel?

REBECCA: I love the front row in both theaters, though every seat is a good one at the Siskel (something not every cinema can boast). I used to be a more “middle of the middle” audience member, but I’ve learned to love being close up, where I find the experience is more immersive.

SCREEN: Your favorite movie that nobody has seen yet?

REBECCA: Leos Carax’s ANNETTE, which we present reopening weekend! It is a hallucinatory experience, a fable, a fairytale, and a musical feast. As with all Carax films, ANNETTE is going to get people talking. Starring Adam Driver and Marion Cotillard singing a rock opera composed by Sparks, the film features (as you may have read) a significant character played by a puppet. I loved it! I’ll be standing in the Film Center lobby as shows let out to hear what audiences think – I anticipate healthy debate.

Here is your first look at ANNETTE:

SCREEN: If you could be a member of any band/musical group in music history, what would it be?

REBECCA: This would mean I could carry a tune or read music, neither of which I can do, much to my chagrin. If I did have a talent for music, I’d want to have been in the orbit of the late, great Prince – singing backup, playing guitar, or honestly just doing his laundry. Prince was born to perform, and every time I watch an old show or set from him, it is clear there was nothing else he could have done but sing and play music. To be around that raw ability would be very cool, and likely humbling.

REBECCA: The staff at the Film Center. We’ve been closed to regular moviegoing for nearly 17 months, and the small but mighty team has been working creatively the entire time – solving problems, finding ways to elevate the films we’ve been presenting virtually, gearing up for reopening, supporting one another as we find our way through this challenging time, and never forgetting our goal of connecting great films with great audiences. My colleagues are some of the hardest working people I’ve had the pleasure of sharing Zooms (and now, finally), an office with.