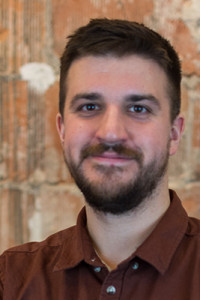 What do Guinness World Records, sweet potato hash, and the Cleveland Browns have in common? They are all front and center this week as 11 Dollar Bill Creative Lead Mike Mullaney stops by to play Five Questions with SCREEN…

SCREEN: We have to ask: What is your big New Year’s Resolution? How is it going so far?

MIKE: I was supposed to run the Chicago Marathon this past year, but it was obviously postponed, so my goal is to actually train and complete the 2021 marathon this time around!

SCREEN: Ok well, on that note, what is your greatest athletic achievement?

MIKE: As a kid I jumped over 600 times on the pogo stick until my brother’s assh*le friend sprayed me with a hose and screwed up my rhythm. I figure that’s probably a Guinness world record and no I will not be fact-checking that.

[Editors note: The tireless team at SCREEN has fact-checked and confirmed Mike did not break the Guinness World Record for most pogo stick jumps…]

MIKE: In college, I worked a single afternoon for the Cleveland Browns doing gate security. I was so accustomed to the rote motion of patting people down that I still patted this inebriated fellow’s bare chest down when he decided it was a good idea to lift his shirt up for me. The Browns are doing better now, but back then being around the stadium on gameday was like a little drunken parade of simmering misery, so yeah, I was a minor part of that.

MIKE: I have really enjoyed reconnecting virtually with a lot of my friends from out of town. I feel like we’ve found an excuse to Zoom and talk more often this past year as we know we’re all just hanging out at home. It’s good to have more communication with people who I typically see only once or twice a year, and we’ve all been like, “Oh, we could have been doing this the whole time!”

SCREEN: Can you cook? If so, what is your go-to dish?

MIKE: I love to cook but really go off when it comes to breakfast + brunch dishes. I really like making a sweet potato and chorizo hash – amazing combo of sweet and savory and highly customizable! I’m also a big fan of making a big pot of red curry or jambalaya every so often.

SCREEN: Your favorite board game?

MIKE: I don’t think this strictly counts as a board game, but I got a Nintendo Switch a few months ago and have been playing a silly amount of Mario Party. But I have always loved chess, and Codenames is also really fun.

MIKE: When I was younger I was absolutely obsessed with LOST when it aired. I think it was probably my first encounter with pop culture that I considered “deep.” I would go on the forums and analyze the meaning of all the show’s mysteries with strangers on the internet, and I remember thinking it was such a vital piece of art that when I grew up I would probably be a college professor and teach a whole course on the show. It was a very hard pill to swallow as I grew up and had to admit that, yeah, the last few seasons were pretty bad and the show didn’t make a whole lot of sense. I think I’ve refined my taste a bit since!