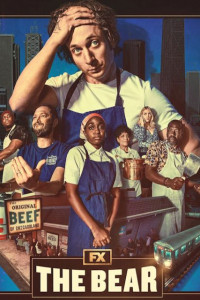 The beef will be back! FX has renewed “The Bear” for a second season soon after Season 1 premiered all at once on Hulu. More great news for the Chicago and Illinois television production community, here’s the lowdown…

The show filmed throughout the Windy City earlier this year, starting in February and wrapping on March 31st. The Bear was created by Christopher Storer (Ramy) and follows Carmen “Carmy” Berzatto (Jeremy Allen White), a young chef from the fine dining world, who comes home to Chicago to run his family sandwich shop – The Original Beef of Chicagoland – after a heartbreaking death in his family. A world away from what he’s used to, Carmy must balance the soul-crushing realities of small business ownership, his strong-willed and recalcitrant kitchen staff and his strained familial relationships, all while grappling with the impact of his brother’s suicide.

The series has marked a return to Chicago for Jeremy Allen White, who spent many a night in town during an 11-season run on Showtime’s Chi-Town Emmy winner Shameless, where he played eldest brother “Lip Gallagher.”

Enjoy this teaser for the newly renewed series..

The Bear has a perfect 100 percent Certified Fresh rating on Rotten Tomatoes and an 86 score on Metacritic.

“‘The Bear’ has exceeded our wildest creative, critical and commercial expectations,” Eric Schrier, FX Entertainment president, said Thursday in announcing the renewal. “We deeply appreciate the brilliant work led by Creator and Co-Showrunner Christopher Storer and Co-Showrunner Joanna Calo. Jeremy Allen White’s lead performance is spectacular, as are those of his co-stars Ebon Moss-Bachrach, Ayo Edebiri, Abby Elliott, Lionel Boyce and Liza Colón-Zayas. We can’t wait to get to work on Season 2.”

“We are so grateful to FX, our insanely talented cast, our crew who worked hard, fast, and in the dead of winter, not to mention everyone who watched. And we can’t wait to bring you all back to The Bear in 2023,” Storer and Calo declared earlier today.

If you’re just hearing about The Bear for the first time today, here’s a quick interview with Jeremy Allen White introducing his charmingly complex character in the acclaimed FX series…

The Unit Production Manager and Co-Producer of Season One was Chicago’s Carrie Holt de Lama, a cornerstone of the television and film production community in town. de Lama helmed the pilot for The Bear which shot in Chicago last July. de Lama’s recent credits include Unit Production Manager of the popular Chicago-made Showtime series Work in Progress, which filmed and premiered its second season earlier this year. de Lama also served as UPM of several episodes of the Emmy-nominated HBO series Lovecraft Country and Showtime’s Emmy winner Shameless.

Looking Ahead to Season Two

When will The Bear be filming again in Chicago? Sources tell SCREEN those dates are still being sorted out, but an announcement is expected soon.

As for the streaming home for Season Two, an FX rep confirmed to IndieWire that The Bear will remain a Hulu exclusive, but could not confirm whether the new season’s release schedule would follow a binge model, weekly model, or some combination of the two. “Too soon on that,” the rep replied to IndieWire’s inquiry.

And as for Season One, all eight episodes of “The Bear” are now available on Hulu. Click here to enjoy the first season.

Check back here at SCREEN for updates as filming of Season Two of The Bear approaches. You can also click right here to subscribe to our weekly email newsletter.