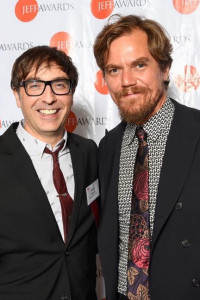 Two Chicago powerhouses will be teaming up for a promising project this August. Two-time Academy Award Nominee Michael Shannon and Joseph Jefferson Award winning playwright Brett Neveu will be collaborating on the independent feature film Eric LaRue. SCREEN sat down with Brett Neveu for an exclusive look at the upcoming collaboration.

Michael Shannon will make his directorial debut with Eric Larue, which is based on the Brett Neveu play that debuted in 2002 at A Red Orchid Theatre in Chicago, where Shannon is a founding member. Neveu also is adapting the script.

This will be the fourth artistic collaboration between Neveu and Shannon. In addition to teaming up with Neveu on two stage plays at A Red Orchid, Shannon most recently acted in Night’s End, written by Neveu, directed by Jennifer Reeder and produced by AMC and Shudder. “We’ve always worked together wonderfully and I respect the hell out of his vision and process,” Brett shared with SCREEN. “He and I also tend to think similarly about character motivation and he’s always asking great questions about story and meaning. Michael makes it fun but also a challenge. And it’s always about making great art.”

What to Expect from Eric LaRue

“The film’s main character is Janice LaRue, the mother of Eric, a teenager who carried out a mass shooting at his high school,” Neveu shared with SCREEN. “At the start of the story, the shooting happened months ago and Janice is now being pushed and pulled by those in her community who want her, and the town, to heal. Feeling confused and threatened, Janice works to understand who she’s become in the aftermath of her son’s horrible deed.”

Oscar nom Shannon shared his connection with the script in a recent interview with Deadline. “Eric Larue has so much to say about our country, about the way we try (sometimes quite ineptly) to deal with the trauma of living here, which is so insidious because it does not present itself overtly in concrete terms most of the time,” Shannon said. “Like most great stories, Eric Larue plays at the macro and a micro level simultaneously. When I read the screenplay, I immediately knew I had to direct it. I saw it. I heard it. I could feel it. And I wanted to make sure that it received just the right touch in all its aspects, because at the end of the day, it is an extraordinarily delicate thing.”

Where Will Eric LaRue Be Filming?

The two Chicagoans will be heading to the Southeast to film Eric LaRue, and that destination has been moved, in the wake of the recent Supreme Court ruling. The film had been scheduled to shoot in Arkansas. But since the Supreme Court’s overturn of Roe v Wade triggered that state’s Act 180 of 2019, which bans nearly all abortions, including cases of rape and incest, the filmmakers have withdrawn from Arkansas and now will be shooting in and around Wilmington, North Carolina.

As for the rest of the team, the feature will be produced by Sarah Green from Brace Cove Productions, Karl Hartman from Big Indie Pictures and Jina Panebianco from CaliWood Pictures. Jeff Nichols, R. Wesley Sierk III, Byron Wetzel, Meghan Schumacher, John D. Straley and Declan Baldwin will executive produce.

It’s been a long road but a worthwhile road for screenwriter Brett Neveu, as he looks ahead to filming Eric LaRue. “I’ve been with this story since back in 1999 when I first started writing the play,” Neveu declared to SCREEN. “Sadly, the subject matter is still prescient and situations haven’t changed. As a result, the project means as much to me as it always has, which is a whole lot. With its adaptation to screen, I was able to expand the world, the characters’ lives, and add more locations and count on visuals to better tell the story. This expansion gives even more gravity to all of it, which should help it resonate even more.”

“I’m hoping the lead character’s journey resonates with audiences,” Neveu shared with SCREEN. “As Americans, we’ve all been going through all sorts of difficulties over the past number of years and this movie speaks to that. The film doesn’t offer any easy answers, either, which I think is the kind of story we’re looking for these days.”

Check back here at SCREEN for more of the latest from visionary artists throughout Chicago and the Midwest. You can also click right here to subscribe to our weekly email newsletter.