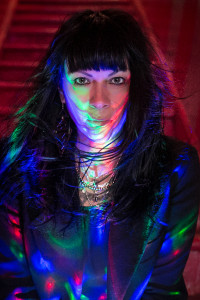 Jennifer Reeder’s next film is here. Shudder, AMC Networks’ premium streaming service for horror, thriller and the supernatural announced the release for Jennifer Reeder’s latest thriller Night’s End is set for Thursday, March 31st. The feature is Chicago through and through, with a cast led by Academy Award Nominee Michael Shannon, Chicago Fire stars Daniel Kyri and Geno Walker, to award-winning Chicago screenwriter Brett Neveu, toThe Ring producer Neal Edelstein. Jennifer stopped by SCREEN for a quick chat on the heels of the news.

SCREEN: Jennifer, what drew you to Night’s End?

REEDER: Brett (Neveu, the screenwriter) and I have been trying to find a project to work on together for a couple of years anyway. This story has elements of classic horror that I wanted to try out (a nuanced kind of John Carpenter vibe). I am known for making films about the experiences of girls and women so I really wanted to tell this story, which is about an adult man. I wanted to look at this character through a kind of “feminine gaze.” I was also really eager to work with producer Neal Edelstein (Mulholland Drive and The Ring among so many others).

SCREEN: What will audiences connect with most in your new film?

REEDER: This is a story about both the value and the anxiety associated with “alone-time”, which of course we have all experienced so much of during this past two years.

SCREEN: Is this film a departure for you in any way from your past films?

REEDER: It is a departure in the sense that its about an adult man, as I mentioned above. We also built a monster for this film, which I have never done before. That was a blast.

SCREEN: What should Shudder fans be looking forward to in Night’s End?

REEDER: I think genre fans will appreciate this film and Shudder fans in particular will appreciate the humanity in the film. Even though, for me, it leans into a kind of classic horror vibes as I mentioned already, its also an elegant kind of chamber piece. Additionally, this film features performances from actors who already themselves have a huge fan base (Geno Walker, Felonious Monk, Theo Germaine, Daniel Kyri, Kate Arrington, Michael Shannon, Larry Grimm and Morgan Reesh). This cast is absolutely outstanding. I am still pinching myself and so so thankful and inspired by all the love and support from Shudder.

Reeder last collaborated with Shudder on V/H/S/94, Shudder’s most watched movie ever. Here’s a quick preview…

Delving Into the Story, Cast, Team

In Night’s End, an anxious shut-in unwittingly moves into a haunted apartment and hires a mysterious stranger to perform an exorcism which takes a horrific turn.

Night’s End is set for release in North America, Australia, New Zealand, the United Kingdom and Ireland on Thursday, March 31. Check back here at SCREEN for the trailer premiere and more as the release date approaches.