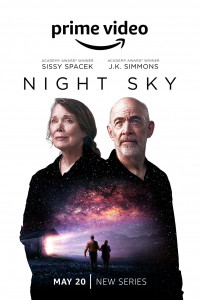 Superb performances from Oscar winners Sissy Spacek and J.K. Simmons were not enough to secure a second season of Amazon’s sci-fi series Night Sky. The news comes a month and a half after all eight Season 1 episodes of the drama co-produced by Amazon Studios and Legendary Television were released May 20.

Night Sky filmed in Chicago throughout much of 2021. The first two episodes were directed by Oscar-winning Argentinian filmmaker Juan José Campanella. Click here for SCREEN’s coverage of the production.

Why was the series canceled? Simply put, Deadline declared, “Launching to largely positive reviews, the series did not make a significant viewership impact while carrying sizable costs tied to its sci-fi content.’

Spanning space and time, Night Sky follows Irene (Spacek) and Franklin (Simmons), a couple who, years ago, discovered a chamber that leads inexplicably to a strange, deserted planet. They’ve carefully guarded their secret ever since, but when an enigmatic young man (Chai Hansen) enters their lives, the Yorks’ quiet existence quickly is upended — and the chamber they thought they knew so well turns out to be much more than they could have imagined.

Click here to enjoy the first and final season of Night Sky.

Despite the series cancelation, make no mistake it will be a busy second half of 2022 for Chicago and Illinois. Check back here at Screen Magazine for the latest. You can also click right here to subscribe to our weekly email newsletter.