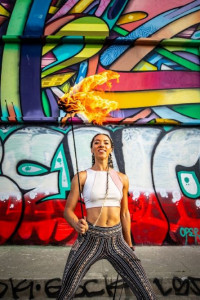 Flow is a state of mind. And when you’re in flow, you’re expressing the deepest parts of you. Such is the message at the heart of Flowing with Fire, the new 360-degree documentary short from director Michael Gabriele and Chicago production company Daily Planet, centers on a group of artists who engage in a hypnotic form of dance combined with pyrotechnics. Viewers, equipped with virtual reality headsets or by clicking and dragging on a computer, can pan scenes and watch flow artists as they spin and twirl flaming batons.

The film pays homage to a unique and mesmerizing new artform and sheds light on the life-altering effect it has on its performers. “Flow art is impressive and beautiful,” says Gabriele, “and seeing it in an immersive format is incredibly exciting. You can virtually feel the flames.”

Among the flow artists featured in the film is Morgan Jenkins, the film’s co-director. She performs a spinning, gymnastic-style routine while brandishing a flaming fire staff. “Flow is the physical representation of your soul,” she insists. “When you’re in flow, you are expressing the deepest parts of yourself.” The performers appear in a variety of striking backdrops including the concrete-lined Los Angeles River and a narrow pier that juts out into the ocean. One of the most visually dramatic segments centers on the L.A. Burn Club a group that meets in a park in the dark of night to “spin jam” with torches lit at both ends.

Behind the Scenes of Flowing with Fire

Gabriele shot the film with a standalone, 360-degree capturing device equipped with six lenses, each recording a panoramic view in 8K. The differing perspectives were stitched together in post-production. “I’m always looking for new tools to tell stories in different ways,” he says. “The 360-degree world provides and incredible and dynamic framework to tell certain types of stories. Flow is an ideal subject.”

The film also features immersive sound created by sound designer and mixer Nick Bozzone. “The soundtrack was mixed ambi-sonically,” Gabriele explains. “If you’re watching on a headset and turn your head, the audio changes direction. It helps draw the viewer in. If a dancer is spinning her flaming staff in front of you, you hear the swish from that perspective. You feel like you are there.”

Prior to the production, Gabriele conducted several tests to work out camera positioning, the staging of performances and other details to maximize the impact of the 3D spatial environment. As the film’s editor as well as its director, he had to work out a way to manage the massive files produced by the 360-degree camera system. “We developed a workflow from scratch that allowed us to edit efficiently,” he recalls. “We also had to do a lot of digitally painting to remove the tripod and other production artifacts. Because the footage is not only 360-degree but also stereoscopic, we had to apply the painting twice for the left and right eye.”

In addition to the video player above, Flowing with Fire can be seen on the VR platform Oculus TV. “I suggest watching it on a headset to get the fully immersive experience,” Gabriele says. “The 360 media is a rich storytelling tool and I believe that it’s going to become more common and accessible. For me and Daily Planet, this project was great fun and it had us working at the cutting edge.”