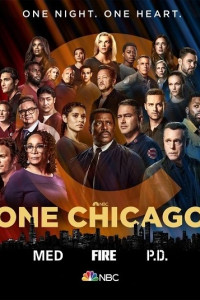 OneChicago is back! Fresh off a thrilling trio of season finales, followed by a summer break to recharge, the beloved Dick Wolf #OneChicago triumvirate of Chicago Fire, Chicago PD, and Chicago Med has begun filming once again. Here’s the quick lowdown on where the three casts and crews will be hard at work this week…

Chicago Med to the Northwest

Filming for the new season of Chicago P.D. will begin on the road. The team is expected to venture outside of the emergency room to shoot on the Northwest Side of Chicago. More specifically, sources report filming near the intersection of Pulaski and Bryn Mawr for much of this week, near 3600-4000 West Bryn Mawr.

Season 10 filming for Chicago P.D. is expected to begin on the South Side of the city this week. Street closures are set for the blocks near 1700 West Cullerton Street and 1900 South Ashland in the days ahead.

Chicago Fire in the House

Chicago Fire will begin shooting its new season right where you would expect. The flagship will be filming at their Firehouse HQ at 1360 S. Blue Island Avenue later this week, according to our friends at Filming In Chicago.

Cinespace Film Studios and their expansive stages are home to all three #OneChicago series when they’re not on location. The OneChicago shows have an anticipated wrap date in mid-May of 2023.

You can mark your calendars for the season premiere as the date is set: Wednesday, September 21st. The OneChicago triumvirate will aim to continue its rule over Wednesday Night TV, with Chicago Med leading off at 7 pm Central, followed by Chicago Fire at 8 pm and Chicago PD closing the night at 9 pm Central.

Looking Back at a Historic Season

There were plenty of highlights across the Chicago Fire, Chicago Med, Chicago PD ranks, but one cornerstone event was the Chicago Fire finale “Stellaride” wedding uniting Taylor Kinney as Kelly Severide and Miranda Rae Mayo as Stella Kidd.

NBC has not confirmed any cast departures to date for Fire, suggesting most of the cast should be returning for Season 11, including Taylor Kinney, Joe Minoso, Randy Flagler, Anthony Ferraris, Kara Killmer, David Eigenberg, Alberto Rosende, and Chicago-theatre-veterans-turned-TV-stars Daniel Kyri and Christian Stolte.

And of course, one actor who will not be returning is Jesse Spencer who departed during the Chicago Fire historic 200th episode…

There will be many announcements ahead regarding the new seasons of Chicago Fire, Chicago Med, and Chicago PD, but for now, you can begin your respective countdowns to September 21st and keep an eye out for those street closure signs in your neighborhood.

Check back here at Screen Magazine for the latest #OneChicago news. You can also click right here to subscribe to our weekly email newsletter.