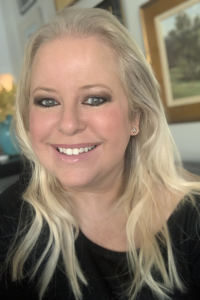 What do Jon Hamm, The Invisible Woman, and the greatest cheese dip ever have in common? They’re all right here as Creative Director Heather Barnes of Cavalry stops by for a thoroughly entertaining round of Five Questions with SCREEN. Let’s get to it!

SCREEN: If you could be the host of any game show in television history, what would it be?

HEATHER: I’d replace Chuck Woolery on Love Connection. Before I met my fiancé I had many, many online dates – some great, some I’m still trying to forget. I could be a real port in the storm to those folks. I’ve seen it all. (I’m really dating myself with that one, no pun intended).

All right, Heather, this one is for you…

HEATHER: Why are you doing this to me? Man, that’s tough. If hard-pressed I would say Samsung’s “Ostrich.” It’s one of those you wish you had thought of because of its simple brilliance. I’m also a huge fan of the Progressive “Becoming Your Parents” campaign right now. Comedy is my first love…

SCREEN: If you could play any superhero in a major motion picture, who would it be?

HEATHER: The Invisible Woman. I think we know why. Think of all the intel you could get???

HEATHER: Jon Hamm at Game 5 of the 2016 World Series. I walked over to him, and said something dumb like “I’m you on MadMen,” and he laughed and took a picture with me. He was so nice. Then the Cubs won, now that was an AWESOME day.

Here’s a Jon Hamm montage that Heather will appreciate…

HEATHER: Cheese dip is my kryptonite. There is a place in my hometown called San Antonio Taco – in Nashville – and I have to go there for their fajita tacos and queso every time I go back home.

HEATHER: I don’t have a go-to song. If anything, I have songs to avoid. My friend Lara and I once had the courage to sing Beyonce’s “Halo” at Lincoln Karaoke. It was… not good. That’s a very difficult key. 10/10 do not recommend.

Heather, you can try one more time with Beyonce here…

SCREEN: Summer is here so we have to ask… what was your best Summer Vacation Ever?

HEATHER: I was lucky enough to go to Greece in 2019 before the pandemic. It was one of the most beautiful places I have ever seen. Hands down. Where else can the view make you weep into your scrambled eggs.

HEATHER: I had a boss once say that our role as creative leaders is to be able to make a decision. I never forgot that. Since then I have always tried to be decisive in my creative choices. Being wishy-washy gets you nowhere.

Thanks for playing, Heather! Be sure to check back here at SCREEN Magazine for a new round of Five Question every week! You can also click right here to subscribe to our weekly email newsletter.