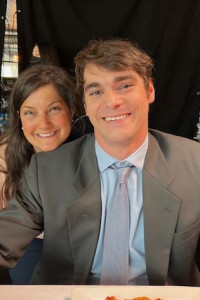 OneChicago and Breaking Bad fans will see some familiar faces in the latest feature film from Chicago-based Lakefront Pictures. Chicago Fire star Christian Stolte and Breaking Bad mainstay RJ Mitte (pictured here) lead the cast of The Unseen, which has now wrapped filming and will forge ahead into post-production. Writer, producer, and actor Jennifer Karum (pictured above with Mitte) stopped by SCREEN for an exclusive look at the story behind this promising production.

In The Unseen, Tommy Olsen (played by RJ Mitte) is a young man with cerebral palsy who has struggled his whole life to “fit in”. He can’t seem to even be a part of his own family despite his best efforts. Tommy has made mistakes and the choices he has made to try to keep his peers and his family respecting him, come back to haunt him. Against his will, he is drawn into a world of secrets, torment, and murder pushing him to the very brink of his sanity.

#OneChicago fans will appreciate seeing fan favorite and Chicago actor Christian Stolte in this film. Stolte is best known for his role of “Mouch” in the ratings king Chicago Fire, and plays the role of “Dr. Phillip Gunderson” in The Unseen.

Enjoy this quick snapshot of Stolte with the team on set…

The team behind the camera is led by director and Chicago filmmaker Vincent Shade. Ryan Atkins lensed the film, Stephen Ruminski served as Unit Production Manager, and stunt coordination was led by Kelli Scarangello. Among the many supporters of the project is the investor collective Chicago Media Angels. Click here for the full list of talented artists contributing to this film behind and in front of the camera.

A Personal Connection to The Unseen

The story of The Unseen bares a personal connection for Jennifer Karum, who wrote the screenplay, and is producing and acting in the film. “I was bullied as a kid and I remember what it was like to just try and fit in and the challenges set before me as an individual on the autism spectrum, with high anxiety,” Jennifer shared with SCREEN. “The need for me to be a part of, I could relate to some of the scenes which were easy to write dialogue for, because I remembered my own horrifying experiences.   But this film is important because it centralizes on the consequences to our actions, and how every action has a reaction.”

“As a neuro-diverse creator, I wanted to really emphasize the impact of bullying and how it can affect someone,” Karum explained to SCREEN. “I know what it’s like to be different and for those who see our characters, they can relate to those who are different or even their own past in which they may have experienced.  I added the horror thriller element as that is a genre that people like, so bringing those two ingredients together I feel it different than most films we see, and I am excited to connect the two. Tommy’s family dynamic alone, gives a relatable story, so there are many intertwined webs that people can connect with.”

Lakefront Pictures is a team of creatives on both sides of the camera, who promote Neuro-divergent leadership, cultural inclusion, and Cerebral Palsy awareness through cinematic storytelling and casting talented unheard voices from the Chicago community. Our mission statement is to tell untold stories from voices normally unheard that will influence others to want to change their lifestyle — Elevating others and giving them opportunities they wouldn’t normally have.

“We hope that the audience will connect with several of the moving themes from our cautionary story of love, loyalty, and vengeance,” Karum shared with SCREEN. “We touch on the pressures of a family’s legacy and expectations, the crushing weight of the guilt of silence, and horrifying secrets of the past refusing to stay buried. The thrills, and speculations the audience will make and the surprises throughout, will have heads spinning. It’s like a mix of a drama and horror thriller, with that perfect mix of suspense and intrigue.”

Next up for The Unseen is the rigorous road of post-production, leading up the eventual festival premiere of the thriller, which will likely be announced later this year or early next.

Be sure to check back here at SCREEN Magazine for news on The Unseen and more independent features filming in Chicago and the Midwest. You can also click right here to subscribe to our weekly email newsletter.