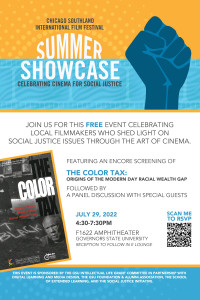 Chicago Southland International Film Festival (CSIFF) presented by Governors State University (GSU) is hosting its inaugural Summer Showcase event on July 29. The festivities will be hosted at Governors State University’s Hall of Governors campus with the subsequent reception hosted in Engbretson Hall. This year’s event will celebrate filmmakers who have chosen to highlight social justice issues through cinema.

Presented in collaboration with the university’s Social Justice Initiative (SJI), led by  Dr. Phyllis West, the summer showcase is one of many events planned to advance the equity and inclusion goals of the SJI.

“As the country grapples with issues of inequality and disparities further exposed by the pandemic, Governors State is engaging our community to explore historical perspectives and solutions,” said West. “I am excited to partner with CSIFF to provide this opportunity for social justice education and awareness in our community.”

Joshua E. Young, Co-Founder and Programming & Operations Manager of CSIFF, added, “The arts bring people together and act as a catalyst for discourse. Cinema, especially, can be a powerful tool for change.”

On July 29th, the summer showcase will present several short films exploring topics including mental health, policing in America, and more followed by a brief Q&A with the filmmakers, including GSU students and alumni.

The program will include a screening of The Color Tax: Origins of the Modern Day Racial Wealth Gap, part three of the documentary series “Shame of Chicago” directed by Bruce Orenstein, and produced by Orenstein and Chris L. Jenkins, in partnership with the Chicago South Side Film Festival. Color Tax shares the story of how a system of predatory home contract sales in the 1950s and 60s plundered enormous wealth from Black families seeking the American dream of home ownership.

CSIFF will host a panel discussion following the film with local historians, artists and activists, and GSU faculty members. Panelists will include GSU faculty members Dr. Anthony Andrews, Associate Professor of Economics, and Dr. Joseph Day, Associate Professor of Addictions Studies and Behavioral Health and the Director of the Community Health Program.

From the community, Dr. Reginald W. Williams Jr., Pastor of First Baptist Church of University Park, Illinois, and Michelle Kennedy, co-producer of Chicago South Side Film Festival and Partner of the Shame of Chicago film series, will join the panel.  SJI Director West will be moderating.

Young says inspiration for the CSIFF Summer Showcase, traditionally limited to its flagship event in the fall, came from the very top of the university.

“During our film festival this past October, The Color Tax was included in our Feature Film Showcase. Dr. Cheryl Green, President of GSU, attended the event and requested another screening of the film here on campus with a more in-depth conversation on the topic,” Young said. “I am excited that this film will again be presented for a live audience and delighted that we could bring it to the GSU community. It is an important work that sheds light on past injustices and propels us forward in our mission toward diversity, equity, and inclusion. To know history is to always be informed by it and to never allow it to be repeated.”

The event will be held on July 29 from 4:30 – 7:30 p.m. The festival will be hosted at Governors State University’s Hall of Governors in the D Building on campus with the subsequent reception hosted in Engbretson Hall. Audience members are encouraged to park in East Lot 1 or West Lot 1 then enter the main entrance near GSU’s circle drive.

This is a free event that is open to the public. Seating is limited and will be reserved on a first-come, first-served basis.  For more information and to RSVP here.

Be sure to check back here at SCREEN Magazine for the latest on film festivals and screenings between the coasts. You can also click right here to subscribe to our weekly email newsletter.