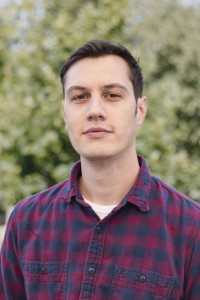 Optimus today announced that Zach Scheitlin has been promoted to Audio Engineer. Scheitlin’s elevation bolsters an already formidable audio team under the leadership of Senior Audio Engineer Marina Killion, and drives the department forward as it serves a rapidly expanding production and post business.

“Zach has been a pinch hitter for us since his first days at Optimus,” said Killion. “However, he was thrown into the hot seat in early 2020 when I left for maternity leave and the world went remote. Zach is smart and tech savvy, and helped the department navigate the world of work-from-home. He took on sessions and projects in my absence, and worked as an engineer throughout the pandemic.”

From A ‘Super Small Town’ in Iowa to Downtown Chicago

In 2013, Scheitlin came to Optimus as an intern after graduating from Flashpoint Chicago with a degree in Recording Arts. He hit the ground running, doing whatever was needed in client services, assisting audio sessions, helping on shoots, and even starring in internal Optimus holiday videos. Scheitlin officially joined Optimus as an Audio Assistant in 2015, and quickly became the backbone of the department. From there, he worked his way up to Senior Audio Assistant in February 2020, and now to Audio Engineer. Scheitlin has engineered for brands including Alka Seltzer, GE, Grainger, Huntington Bank, and Samsung, and partners frequently with Allies & Co., Bader Rutter, BVK, Cramer Krasselt, Edelman, Havas, Ogilvy, and SPM.

“I have been working toward this role since starting with Optimus, and I am so excited about the promotion,” remarked Scheitlin. “Over the past year and a half, the pandemic accelerated our move to integrate new services, tools, and ways of collaborating into our workflow that will benefit our clients and internal team into the future.”

Scheitlin hails from Mediapolis, a ‘super small town’ in Iowa. His twin brother, now a designer, was his first collaborator. Throughout their childhood and into high school, they made films together with their friends, leveraging YouTube and relishing its DIY mentality.

Scheitlin brings a creative bent to all his work, which is enriched by his many side projects, including the Jack Newell/Zaxie Films documentary 42 Grams and his newest feature, Monuments. He also worked on the feature documentary The Water is My Sky in collaboration with USA Swimming, and has mixed numerous award-winning short films including “Eat Your Heart Out,” “Cool For Five Seconds,” and “Backlash.”

Here’s a preview of the feature Monuments…

“Zach has always been such a huge part of our team, eager to help and collaborate, and to put his creativity to use,” said Killion. “It has been a joy to watch him grow into this role and continue to impress his colleagues and clients every day. This promotion is very well earned.”

Added Scheitlin, “I look forward to continuing to grow the Audio Department with Marina and others, and getting to work even more hands on with our entire Optimus creative team. I’m ready to get started.”