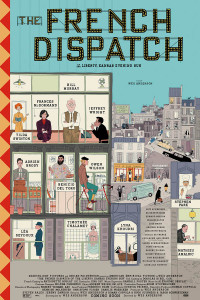 A trio of highly anticipated films will open this year’s Chicago International Film Festival, here is the rundown for tonight’s famed festivities…

TONIGHT AT 7 PM AT THE MUSIC BOX THEATRE: THE FRENCH DISPATCH

On the occasion of the death of their beloved editor Arthur Howitzer, Jr., staffers of The French Dispatch, a widely circulated American magazine based in the French city of Ennui-sur-Blasé, convene to write his obituary. Memories of the Kansas-born Howitzer flow into the creation of four stories: a travelogue of the seediest sections of the city itself from The Cycling Reporter; “The Concrete Masterpiece,” about a criminally insane painter, his guard and muse, and his ravenous dealers; “Revisions to a Manifesto,” a chronicle of love and death on the barricades at the height of student revolt; and “The Private Dining Room of the Police Commissioner,” a suspenseful tale of drugs, kidnapping and fine dining. Featuring an all-star cast (Benicio del Toro, Adrien Brody, Tilda Swinton, Léa Seydoux, Frances McDormand, Timothée Chalamet, Jeffrey Wright, Mathieu Amalric, Bill Murray, and Owen Wilson), The French Dispatch is yet another wondrous and inspired tale from the visionary mind of award-winning filmmaker Wes Anderson.

TONIGHT AT 7 PM AT THE DRIVE-IN: THE VELVET UNDERGROUND

The Velvet Underground created a new sound that changed the world of rock and roll and made Lou Reed famous for his distinctive lyrics and attitude. Acclaimed filmmaker Todd Haynes (Velvet Goldmine, I’m Not There) shows how the group grew out of the New York City underground scene to become a cultural touchstone and groundbreaking musical force. Weaving together clips from the avant-garde cinema of Andy Warhol and Jack Smith with a treasure trove of never-before-seen images and wry interviews with band members including John Cale and Moe Tucker, Haynes’ The Velvet Underground is a mesmerizing, immersive journey into the artistic explosions of the early ’60s and one of the most influential bands of all time.

But when Michael manages to free himself from Laurie’s trap, his ritual bloodbath resumes. As Laurie fights her pain and prepares to defend herself against him, she inspires all of Haddonfield to rise up against their unstoppable monster. Evil dies tonight.

For the full schedule and much more from the Chicago International Film Festival, click right here. Check back at Screen Magazine for features and photos throughout the fest.