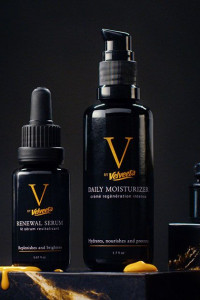 Feel the magnificence. Breathe in the bliss. But it might not be the bliss you are expecting. Optimus and VMLY&R teamed up for a series of hilarious spots for Velveeta that had social media buzzing – and laughing – earlier this month.

Kraft Heinz’s Velveeta kicked off April with the debut of “V by Velveeta,” a fictitious line of luxury skincare products designed to “help you discover your skin’s natural, creamy complexion.” Velveeta claimed its new faux “V by Velveeta” products “are inspired by the unmatchable creaminess of Velveeta liquid gold, and have been meticulously designed to make your skin feel smooth, hydrated and moisturized.”

Let’s “indulge ourselves” with one of the thoroughly entertaining spots, “Melty Moisturization”…

SCREEN chatted with Optimus Editor Matt Glover about the April Fools’ Day spots that wound up setting YouTube aflutter. “As far as the creative process approach, The team at VMLY&R had a great vision and concept of imitating all of the cheesy skincare ads we have seen before, but gave us a lot of freedom to explore different textures, scenes and sounds to bring it to life.”

The campaign included two Saturday Night Live-style promotional videos: the afore-mentioned “Melty Moisturization,” and “Indulge Your Indulgences,” (click here to view) both of which feature warm yellow-gold visuals and a sensuous, slow voiceover that celebrates the creamy richness of Velveeta processed cheese products.

“I think the entire team did a great job replicating what is typically a very high end production in a very short period of time,” Glover told SCREEN. “From Production with ONE at Optimus, Mix from Marina Killion, and Color done by my assistant Margo Hess in Premiere… every piece helped elevate it to be believable as a skin care ad and made the joke land that much more.”

Glover also noted that some viewers might have taken this Velveeta joke a bit too seriously. “Some people I have spoken to actually thought it was a real product and did not realize it was April 1st.”