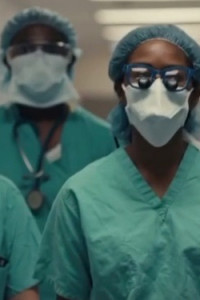 Leading healthcare forward to a future that is brighter and better. That is the main mission for Chicago-based Northwestern Medicine, and production and post house Optimus, executive producer Jon Desir, and editor Ruben Vela have teamed up with NWM to share the latest innovations in medicine and patient care, including the country’s first double lung transplant in combating coronavirus. Let’s take a look at the new 30-second spot and go behind the scenes with Optimus:

As you might expect, filming in this pandemic environment offered more than its fair share of challenges, and Optimus Executive Producer Jon Desir spoke with SCREEN about his team’s ability to rise to the occasion. “The collaboration and work flow was a little unique for us in comparison to other projects,” Desir told SCREEN. “But also the speed that we pulled it off in during these COVID times was pretty special as well.”

“From the outset, we were consulted on the production from a VFX standpoint to the color and editorial to speak to how it would all come together in post,” Desir continued. “Because of Covid, we had to take extra special precautions in terms of production safety. And do everything remote for the post production which has its challenges. But we have been doing this for a few months now so we were able to apply those practices across the board and work pretty seamlessly with the client.

And as always, it’s all about the editing and the post to bring the vision together, and that was where Optimus editor Ruben Vela took the baton. “A lot of coordination occurred between Optimus and the production to make it seem like all the doctors were together when they were actually filmed separately due to schedules and Covid precautions,” Vela told SCREEN. “You cannot pull an entire neurology department from a hospital like Northwestern, let alone expose them to the pandemic.”

Vela summarized the team effort with the following, “Though the end result seems very straightforward and simple, it took a lot of careful considerations to the smallest details to make it appear as seamless as possible.”