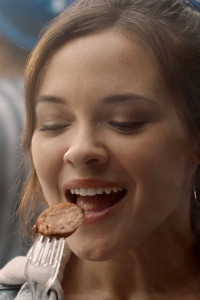 Are you a Tongsman? You’ll find out right now as charlieuniformtango teamed up with new Milwaukee-based agency Hold Fast Co., and newly formed creative alliance, Dallas-based “Bill and Todd” (comprised of Bill Milkereit, writer and Todd Tucker, art director – both 20+ year veterans of The Richards Group), on a new campaign for Johnsonville Sausage just in time for the Southern tailgating season.

The campaign, featuring a full array of TV and radio spots, introduces “The Tongsman” – a heroic term coined by Bill and Todd. To help capture the spirit of the South, the campaign was shot in Atlanta. “Even though we focused on the grill and the sausages, we wanted the spots to come across as authentically Southern, and the Georgia landscape added to that feeling,” said Todd Tucker, Bill and Todd art director.

Calling All Tongsmen! Let’s take a look at this charming tailgating spot…

In moody, smoke-filled film, the campaign introduces “The Tongsman,” a true artisan of the game day smokeshow whose mindset and skillset go far beyond that of a mere “griller.” Most important, they never, ever forget the oft-overlooked sausage. “Johnsonville is the Official Sausage of the SEC,” said the campaign’s writer, Bill Milkereit. “Hold Fast and Johnsonville wanted to find a creative team that truly understands tailgating culture in the South – because it is unlike anywhere else on the planet – and we are delighted that David Dugan (founder of Hold Fast) and Chris Jacobs (creative director/consultant of Hold Fast) found us.”

Dugan’s choice was founded on industry recommendations and the outstanding creative work Milkereit and Tucker have done together for Chick-fil-A, The Home Depot, and especially the SEC’s “It Just Means More” campaign. Much of which was also through charlieuniformtango.

“This whole project is a great example of the new world order: Pulling together seasoned talent from different mediums to work together to build a client’s brand with a smaller, more nimble team,” said Milkereit. “With this new kind of team formation, frankly, we didn’t know the protocols or how much control we as creative free agents could have throughout the production process, but we knew we wanted charlieuniformtango in the mix,” said Tucker. “We’ve been in the foxhole with tango many times over the last 20 years, and we know they always go off the charts to get the job done right. Whether it’s spec work or a SuperBowl spot, there’s no difference in their level of commitment. This campaign involved a lot of back and forth and late nights. We couldn’t have picked better teammates.”

One more new spot from the campaign for you… Can you solve the Tongsmanian Theorem? Very funny stuff:

The tango team included Russell Smith’s audio engineering talent and Deedle LaCour’s editing skills. “In short, it’s some of my favorite work in years. It’s also a full circle thing for me as I cut my editorial teeth on another famous breakfast sausage brand when I first started at tango. I got a little obsessed with sausage after that,” Deedle said.