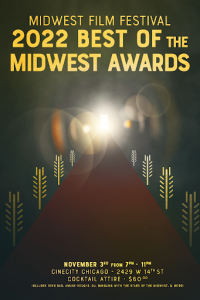 After a successful year with several sold-out shows, the Midwest Film Festival (MFF) honors the work of multiple filmmakers featured in their monthly First Tuesdays series in 2022. These creatives will be honored in various categories at The Best of the Midwest Awards, or BMAs.

The event will kick off at 7:00 pm, Thursday, November 3rd, at CineCity Studio Chicago. Guests can enjoy networking, an open bar, music, and appetizers. At 8:00 pm, an exciting awards ceremony will commence hosted by Jonathan Desir that includes clips from each nominated film, special guests from the Chicago film community revealing the winners, and filmmakers’ acceptance speeches.

It will be a special night for attendees, allowing them to connect with colleagues while meeting new collaborators and honoring the films that made MFF’s year noteworthy.

The Nominees for this year are:

The Best of the Midwest – Grand Prize

Emma Thatcher as Liz For PROVO

Charin Alvarez as Soledad For HEARTSONG

Jana Prentiss as Jade For JADE

John Helland as John For INDELIBLE

Glenn Stanton as Charlie Maxwell For AFTER (A LOVE STORY)

Cathryn Stark For AFTER LIGHT

Steve Rowell For COMFORT IN HYDROLOGY

Best Use of a Prop

The Train For EXPERIENCE THE WORLD – THE TRAIN

Tickets for this event are available at www.midwestfilm.com/get-tickets featuring special promotional discounts for potential members and sponsors.