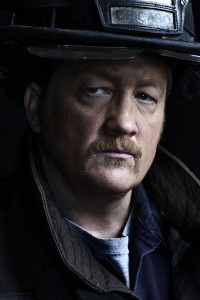 What do Gordon Ramsay, David Bowie, and an epic snowball fight have in common? They are all right here as we have a very special guest for this week’s round of Five Questions with SCREEN. Chicago Fire star Christian Stolte plays fan favorite “Mouch” on the flagship OneChicago show. Christian stopped by for a thoroughly entertaining round of Five Questions. Let’s get to it!

CHRISTIAN: Yuriy Sardarov once threw a snowball at me, and I karate chopped it in half before it could do any damage. Is there photographic evidence of this event? Why yes there is. Don’t even try to tell me that wasn’t athletic; I will karate chop you in half.

And yes, we have the photo of this momentous feat! Courtesy of photographer Elizabeth Morris…

SCREEN: If you could be the host of any game show in television history, what would it be? Why?

CHRISTIAN: Jeopardy, assuming I could somehow rise to that occasion. Jeopardy is the gold standard for game shows, and the contestants have to earn that cash — nobody’s walking away a winner from just a lucky spin of some giant wheel.

SCREEN: You’ve been a part of every episode of Chicago Fire ever so we have to ask… what is your favorite episode of all of em?

CHRISTIAN: This question is more complicated than it sounds. I’m never sure whether to base my answer on the experience of shooting it, or the experience of watching it. On top of that, there is the “10-year-blur” factor, which is to say the reality of shooting these episodes is an uninterrupted, often-overlapping season-long marathon, making it difficult for me to differentiate one episode from another. Having said that, I loved shooting and watching “Going to War” by Andrea Newman and Michael Gilvary, directed by Reza Tabrizi. That’s the episode where we first meet Daniel Kyri’s character, Ritter. And “Natural Born Firefighter,” written by Matt Whitney and directed by Eric Laneuville, was the episode that featured my best rescue. Overall, though, nothing quite compares to the fun we had shooting “Dead Zone,” written by Ashley Cooper, directed by Matt Earl Beesley. Our 201st episode, season 10, episode 6. No fires, no incidents, just super-intense, high-stakes action in the bullpen of Firehouse 51.

SCREEN: One dinner, any restaurant, anywhere on the planet, and we’re buying. Where are you heading?

CHRISTIAN: I want to eat at the Chef’s Table in Hell’s Kitchen in the Blue section on a night when the Blue team has screwed up so badly that Gordon Ramsay ejects them from the kitchen, and he and Christina Wilson are forced to prepare the food. A front row seat to that kind of chaotic, explosive drama, capped off by a world class meal. Sounds like a swell evening to me.

CHRISTIAN: I worked in the funeral industry for four years, in four different states. Specifically in the “prearranged funeral” department, cold-calling people about their inevitable departure from this mortal coil. Good lord, that was brutal.

“Starman”! David Bowie! Because it’s a brilliant song, it never gets old, and it’s more or less in my range!

Thanks for playing, Christian! To catch up on the latest episodes of Chicago Fire, click right here.