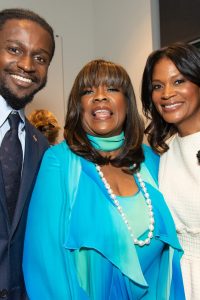 An uplifting and inspiring evening, and we’ve got the pics to prove it. Established in 1975, the now 47-year-old art cinema and pioneering video rental outlet FACETS hosted its first Screen Gems Benefit since before the pandemic, and honored Chaz Ebert with the FACETS Legend Award on Wednesday, September 28th from 6:00 to 10:00 pm, at the Arts Club of Chicago, 201 E. Ontario St.

Approximately 150 guests attended the sold-out fundraiser, enjoying cocktails and a buffet dinner. Attendees then adjourned to the theater for a variety of presentations.

Here are some fabulous photos from the festivities, courtesy of photographer Lydia Hoover…

FACETS’ Board of Directors Co-Chair Randy Adamsick provided an emotional remembrance of the organization’s late founder Milos Stehlik (1949-2019) which was followed by an inspiring institutional report from Executive Director Karen Cardarelli who also announced the launch of the Chicago Alliance of Film Festivals to bring unity and economic vitality to film festivals and venues in the Chicagoland area and beyond. Then, Chicago Tribune Film Critic and Filmspotting Guest Host Michael Phillips took the stage to recognize Chaz Ebert for her numerous contributions to the film industry followed by a tribute video created by Mint Media Works, and the presentation of the FACETS Legend Award, an engraved glass brick from Catalan artist Jaume Plensa’s Crown Fountain in Chicago’s Millennium Park, provided by the Richard Gray Gallery. Ms. Ebert’s acceptance speech was mostly off-script and incredibly sincere and heartfelt. Before the event’s conclusion, Alyssa Quinlan from Hindman Auctions presided over the paddle auction.

Entrepreneur, publisher, author, producer, and philanthropist Chaz Ebert has spent her career championing overlooked films and filmmakers, providing invaluable opportunities for new and diverse voices. Her work as a film producer, most recently in Rebecca Hall’s Passing, has bolstered diversity and change in the film industry.

As president of the Roger and Chaz Ebert Foundation, Ms. Ebert is passionate about programs that help break the glass ceiling for women and people of color and provide education and arts for women, children, and families. She has provided grants to support films with strong social justice themes, and she supports emerging writers, filmmakers, and technologists with her endowment of scholarships, internships, or awards at the Sundance Film Festival, Film Independent Spirit Awards, the University of Illinois Ebert Fellowships, the Hawaii International Film Festival-Young Critics Program, the Telluride Ebert/TFF University Seminars, the Chicago International Film Festival Ebert Director Awards, and the Columbia College Links Journalism Awards in conjunction with the Chicago Urban League.

She is a life trustee of the Art Institute and serves on the boards of the Lyric Opera, the Lincoln Presidential Foundation, After School Matters, and the Shirley Ryan Ability Lab, along with the Honorary Board of Family Focus and the Advisory Board of FACETS.

Ms. Ebert has been a longtime supporter of FACETS and a beacon of advice and encouragement as the organization has found its new place in the cinema landscape.

In attendance were the following:

Be sure to check back here at SCREEN Magazine for the latest from the Chicago and Illinois filmmaking community. You can also click right here to subscribe to our weekly email newsletter.