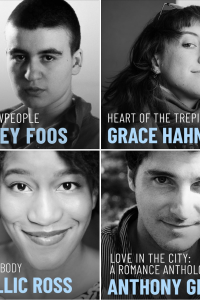 Meet the inaugural class of the Chicago Independent Producers Lab, fueled by a partnership between Full Spectrum Features and Chicago Film Office, with support from the National Endowment for the Arts. The Lab recently held its first quarterly two-day workshop with this cohort of four emerging producers, which were selected from a competitive application process earlier this year. Each with strong community ties to Chicago, the four producers are (pictured here): Harley Foos, Grace Hahn, Angellic Ross, and Anthony Gibson. Let’s meet the producers and their upcoming feature films for Chicago…

Raised in Milwaukee, WI, Angellic Ross attended Northwestern University where she studied Performance Studies and Film & Media Studies. Her mission is to provide sustainable resources for women and voices of color. Long term, Angellic hopes to own a production company and teach film studies and business classes.

Angellic’s project, GO TO THE BODY, is about a young couple navigating the trauma of a sexual assault. When Sanaa is sexually assaulted, her relationship with Kendrick is put to the test. As she tries to return to her life as a feminist political organizer, she struggles to process her attack. Meanwhile, Kendrick channels his aggression into his boxing career as he confronts questions about masculinity, violence, allyship, and blackness.

Grace Hahn is a Chicago-based producer whose recent projects include ONCE UPON A RIVER and PRINCESS CYD. Grace is an advocate for uplifting leadership, equity amongst cast/crew, and sustainable production methods. She hopes to never leave Chicago.

In Grace’s project, HEART OF THE TREPID, five friends reunite at the funeral of their D&D dungeon master whose dying wish was that they finish the campaign that tore them apart 17 years earlier. As the evening unfolds, they open up old wounds, battle orcs, flee dragons, and dance their hearts out.

Enjoy the trailer for PRINCESS CYD, produced by Hahn, recently named one of the best films of the 2010s by Variety‘s Richard Lawson:

Anthony Gibson is a writer, poet, and filmmaker living in Chicago, IL. In 2019 he was awarded an Individual Artist Program Grant from the city of Chicago and his debut poetry collection, LIONFLY, is set to publish later this year.

Anthony’s project, LOVE IN THE CITY: A ROMANCE ANTHOLOGY, celebrates young love as it runs rampant in Chicago over the course of one dream-like summer day. Through a series of entangled vignettes, a mysterious figure threads nine relationships together as each enters a new phase of life. From budding love to a bittersweet homecoming, LOVE IN THE CITY explores the kaleidoscopic forms that love can take.

Harley Foos is a Chicago-based filmmaker with a passion for collaboration and underground arts. Their work has been featured in AFROPUNK, Flood Magazine, The Deli Magazine, Post-Trash, and the Chicago Tribune. They are currently the Director of the Film Division at Pop Magic Productions.

Harley’s project, THE SNOWPEOPLE, is about a punk band upended by a sexual assault allegation. When Sara’s DIY house burned down and her crush was outed as a rapist, she hit the road. Two years later, she returns to Chicago to face the life and the people she left behind. Now Sara and her new group of old friends must decide whether they will go back to business as usual or intervene in a devastating cycle of violence.

Here is a recent piece from Harley Foos:

What’s Next for These Four Producers

Originally intended to be held as in-person weekend retreats, the program shifted to a virtual event in response to the coronavirus pandemic. Filmmaker Kyle Henry (director of the feature film ROGERS PARK) facilitated the first of four workshops designed to address every aspect of the independent film producing process. Henry is joined by Chicago-based mentors including Jennifer Reeder (KNIVES AND SKIN), James Choi (SAINT FRANCES) and Kris Rey (I USED TO GO HERE). In an effort to connect participating producers to the national independent film industry, additional mentors include producers Mollye Asher (THE RIDER), Megan Gilbride (TOWER), Josh Penn (BEASTS OF THE SOUTHERN WILD) and Avril Speaks (HOSEA). At the conclusion of the lab, will present their projects to investors, production companies, and other industry professionals.

“As an organization dedicated to driving equity into the film industry, a core component of the lab is facilitated conversation around representation and accessibility,” added Full Spectrum Features Interim Executive Director Jason Matsumoto. “After all, the stories produced today will inform the world we live in tomorrow.”

Screen Magazine will keep you posted as these four new feature films forge ahead into production.