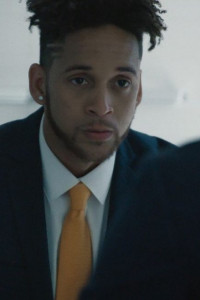 It’s time for a fresh and honest take on the world of professional sports, and this scripted Chicago-made drama might be getting its call to the field. The pilot Devonte was produced, shot and edited entirely in Chicago, and is riding high off its World Premiere at the prestigious Slamdance Film Festival. Filmmaker Josh Kahn makes his scripted directorial debut here and explores how professional athletes conceptualize fame, the media, and the cities they play for. So what’s next for this potential new series and when might we see Devonte filming in Chicago? Let’s hear what the director has to say.

“The sports world has always been somewhat glossed over and sort of kept in a specific lane when it comes to television and film,” Kahn shared with SCREEN. “With this show, I hope to break that mold, and create something that is a bit more of a nuanced and human look at the world because I have so much first-hand experience with space.”

It All Began With Your Chicago Bulls

As for that first-hand experience Josh is referencing… Devonte was shot by a group of Chicago filmmakers that was brought together by, well… basketball. The core filmmakers worked for the Chicago Bulls internal production department, that being Josh Kahn (Director/Writer/EP), Charlie Fritschner (Producer), Cody Madsen (Director of Photography), Chris Ramirez (Director of Photography). Director Josh Kahn’s seven year stint with the Chicago Bulls including helping the launch of BullsTV. Josh went on to Uninterrupted and the Springhill Company where he spent several years making athlete focused documentary films before launching his own banner, MYLES, which produced the film.

What to Expect from This Promising New Pilot

Controversial superstar quarterback Devonte Mitchell lands in his hometown of Chicago to sign a new $150 million contract for the city’s professional football team. The film tracks Devonte’s first 10 hours in the city as he confronts the weight of hometown expectations and the ghosts of his past.

The central character of Devonte is portrayed by Chicago theatre actor Julian Parker. He is an ensemble member and co-founder of Definition Theatre Company: which is a Chicago-based, non-profit theatre company. Parker is a Joseph Jefferson Award recipient for Best Actor in a Principal Play (Oracle Productions’ The Hairy Ape). He has also received a Black Theatre Alliance Award for Best Actor in an Ensemble for his work in Antoinette Nwandu’s world premiere, Pass Over, at Steppenwolf Theatre Company.

“After spending those years working at the Chicago Bulls as their creative producer and working around pro-athletes I felt there was a commentary to be made on the world in a way that hadn’t been done yet,” Kahn shared with SCREEN. “I’m a big believer as an artist in drawing from what you know and I had spent so much time in the space, I felt there was something authentic to say, and I was also hungry to challenge myself to direct something scripted with the limited resources that I had. So naturally working with my sports doc teams and improv-oriented theatre actors was a natural fit to make this one happen. This pilot was not possible without all the talented artists that came together to make this vision come alive.”

And the sacrifice and determination of this ensemble is evident, as Devonte was made for less than $5000.

What’s Next for Devonte

The series is targeting a tentative series shoot date of Spring/Summer 2023 in Chicago (or as Josh calls it, “the most beautiful time of year”), should everything fall into place for the show. But there are quite a few more hurdles to climb ahead. With that in mind, Kahn and his team couldn’t ask for a more promising start than a World Premiere at one of the more selective and coveted film showcases in the country, that being Slamdance.

Be sure to check back here at SCREEN Magazine for news on Devonte in the months ahead. You can also click right here to subscribe to our weekly email newsletter.