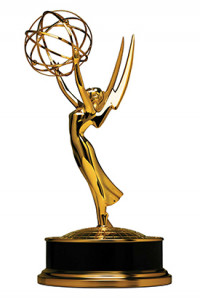 The Chicago/Midwest Chapter of the National Academy of Television Arts & Sciences (NATAS) is pleased to announce that the virtual 63rd Annual Emmy® Awards ceremony will be live-streamed on Sunday, December 5, 2021, at 7 pm. The annual event, which honors regional Emmy® winners in a wide range of broadcast and craft categories, will be available online at the NATAS Chicago/Midwest website. It will also be available on You Tube and the Emmys® app.

“Due to the continued health threat of Covid-19, we chose not to stage the upcoming Emmy® Awards in front of a live audience,” said Chicago/Midwest NATAS President John Owens. “I sincerely hope that we can get back to being with you in public next year — the Emmys® are meant to be celebrated live and in person with your peers. Our Board of Governors had a real healthy debate about whether or not to do the event live this year, but in the end, we thought everyone’s well-being was most important.”

Comedian Pat McGann, the South Side native who hosted the Chicago/Midwest Emmys® in 2016 and 2020, returns to emcee the show this year. In 2017, McGann began touring as the opening act for Sebastian Maniscalco, moving with him from clubs, to theater, and to arenas, including four sold out shows at Madison Square Garden. McGann’s impressive resume, includes performances on The Late Show with David Letterman, The Late Show with Stephen Colbert, Montreal’s famed Just For Laughs Festival, Gilda’s LaughFest, The Great American Comedy Festival and the Nashville Comedy Fest. McGann still calls Chicago home.

“I’m thrilled to be hosting the Emmy® Awards again,” McGann said. “And equally excited to still say to people not that Emmys®…the Chicago/Midwest Emmys®. I used that line back in 2016 and even now, in 2021, it’s still true. We won’t be renting a huge tent with chandeliers as the Primetime Emmys® did. The chapter doesn’t have that kind of money… obviously, they hired me.”

“We’re excited to have Pat host again,” said John Schippman, chairman of the Chicago/Midwest NATAS Emmy® Events Committee. “He did a great job last year as we drove around a near empty city to film the show. Pat calls Chicago home and we can’t wait to be laughing with him on December 5th.“

The chapter is also pleased to announce that World Business Chicago has signed on to be a sponsor of the event. “Throughout the past twenty months we’ve met and overcome incredible odds and challenges. Center in all that has been our local media, providing a lifeline of information,” says Andrew Hayes, VP, Marketing & Communications, World Business Chicago. “It is important to us and the city that we pause and put our accelerated schedules on hold for a few hours to toast our local media for the outstanding work they did to keep everyone informed throughout this unprecedented time.”

Industry professionals will be honored in several categories on this festive evening, which also includes the announcement of the 2023 class of Chicago Silver Circle Award inductees and the presentation of thousands of dollars in scholarship money to deserving students. The NATAS Chicago Foundation has distributed more than $630,000 in the past two decades to students studying journalism, television production and communications.

Chicago/Midwest members come from all areas of the industry and includes Illinois markets: Chicago, Rockford, Peoria-Bloomington; Wisconsin markets: Milwaukee, Green Bay-Appleton, Madison, Wausau-Rhinelander and Indiana markets: South Bend-Elkhart. The Chicago Chapter was founded in 1958 after an expansion call by then National President, Ed Sullivan. The Chapter is one of the largest and most senior local chapters in the country, with a proud history of innovation and excellence in the field of broadcast television and beyond. The Chicago Chapter became regional in the early 1990s, becoming the Chicago/Midwest Chapter by expanding to include markets in two neighboring states.

For more information about the Chicago/Midwest Chapter of the National Academy of Television Arts & Sciences, visit www.chicagoemmyonline.org