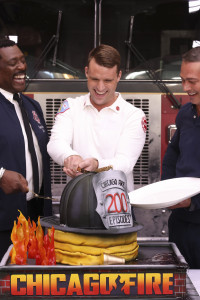 October 20 is going to be a huge date for all fans of Chicago Fire as it will mark the 200th episode of the mothership of Dick Wolf’s popular One Chicago franchise. The cast and crew of Chicago Fire recently celebrated the filming of this momentous 200th episode and here are some photos from the firehouse…

The series bowed on October 10, 2012, and has been a winner for NBC ever since, leading to sister series Chicago P.D. and Chicago Med. Congratulations to Executive Producers Dick Wolf, Matt Olmstead, Joe Chappelle, Hilly Hicks Jr., Peter Jankowski, John L. Roman, and the entire One Chicago cast and crew.

More about Chicago Fire: As the firefighters, rescue squad and paramedics of Chicago Firehouse 51 forge headfirst into danger, the choices they make can mean the difference between life and death. But from the relentless pressure of saving lives, an extended family is forged. Led by Chief Wallace Boden, Matthew Casey, Kelly Severide, and the others know — when it’s go time, Firehouse 51 lays it all on the line for each other. This high-octane drama from Executive Producer Dick Wolf offers an edge-of-your-seat view into the lives of everyday heroes committed to one of America’s noblest professions.

Click here to catch up on the current season of Chicago Fire.