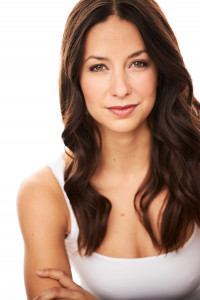 Adriana Leonard has graced your television screens in the popular series Chicago P.D. and Empire, but now she is bringing her own vision to the table, and the response has been stellar. Leonard is co-writer and co-star of the series Beta, which just made its world premiere at the renowned Bentonville Film Festival this past weekend. Adriana stopped by to tell you all about Beta and to jump into an entertaining round of Five Questions with Screen!

SCREEN: What has been your favorite moment out at Geena Davis’ Bentonville Film Festival with your series BETA so far?

ADRIANA: Geena was present on opening night of the fest and it meant so much to me that she was there. It felt like her way of saying, “Hey, I genuinely care about you all and your projects and I support you and I’m with you.” She’s so kind and real. I appreciate that.

SCREEN: What will viewers enjoy/love/adore the most about your new web series BETA?

ADRIANA: Beta is funny and unexpected. It’s relatable and refreshing at the same time. I think viewers will really love our characters, Lini and Delta. They are so nuanced and flushed out and each one of their journey’s (or arc) is not only huge, but it’s real life stuff. And both of them have hilarious moments that will really surprise you!

Treat yourself to some laughs in this first look at the series Beta:

ADRIANA: So fun fact…I just did karaoke in public in front of an audience for the first time in my life a few weeks ago in New York during Tribeca. I’ve always been terrified to sing, but my friend and I did “A Whole New World” from Aladdin and now I think I’m addicted.

ADRIANA: Eddie Murphy or LeBron James maybe? Fame is weird and sometimes I’m very naive to who the tabloids might say is “most famous,” but I’m pretty positive most of the world knows those two names.

ADRIANA: Scored the winning goal my senior year of high school in our championship game? That was a LONG time ago. Haha I was a competitive dancer most of my life and didn’t do much with sports. But in my adult life, (not to brag) but I’m pretty cool on a mountain bike. I’m not competitive or anything, but it is my favorite way to clear my mind, push my body and get an adrenaline rush!

ADRIANA: I don’t think I could do a job where I had to wear heavy clothing or a uniform and be in extreme heat. I’m quite a fainter and I just don’t think it would work out.

ADRIANA: The boldness and bravery of the women around me. It’s incredible how much observing the strength of my friends, my colleagues and even strangers fuels me to be better, be more aware, be bolder, be braver and to love and appreciate who I am. I’m thankful every day for those moments.

Click here for more from the new series Beta.