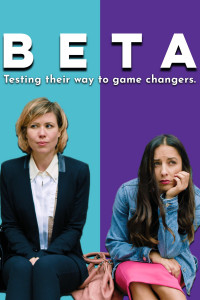 Set aside the Netflix remote for a night and enjoy some local fare this weekend! The first season of the female-driven, Chicago-made web series BETA is now up and ready for your binge-watching pleasure. The nine-episode series was created by Adriana Leonard and Carley Marcelle, and you can click here to enjoy the full season at betatheseries.com

BETA centers on the characters of Lini and Delta, played by series creators Leonard and Marcelle, respectively. Angelina “Lini” is—was—Delta’s assistant. But now they’re… TBD. After Delta finds out her soul-sucking corporate consulting job is officially a dead end, Lini convinces her to pursue her daydream of becoming an “entrepreneur.” What begins as a strange work dynamic between an odd couple eventually grows into two women recognizing the best (and the worst) in each other, and deciding that they’re stronger as a team, in both life and business.

“BETA is the story of an odd pair of women you didn’t know you needed in your life. Seriously, it is!” co-creator, co-star, and producer Adriana Leonard told SCREEN. “Everyone has a dream. And everyone can relate to feeling scared to take a leap of faith, or inadequate in their pursuit of goals that feel beyond their reach. BETA is a story of courage and a reminder to believe in yourself even when no one else does. It is a story of conviction and problem solving. It is a story that shows not just women, but anyone, that you can break the mold that you feel stuck in and redefine yourself. And most importantly, it is a story of friendship and a reminder of how sometimes we need people along the way to help us find the light.”

Let’s take a look at the trailer for the first season of Chicago-made BETA:

The season was filmed in Chicago at a breakneck pace with a female-driven cast and crew. As for the challenges encountered during this ambitious indie endeavor, “If we could put time in a bottle, ya know? Filming 9 episodes in 6 days was a huge feat,” Leonard explained to SCREEN. “Making art is so humbling, and the way that our network of supporters showed up to help us get it done truly fills my soul. It’s the reason we as artists keep coming back I think… that feeling. That community. We had to be extremely organized going in and knew there would be hiccups in scheduling if anything went wrong.”

“Lucky for us, our Director Calli Ryals and our 1st AD Erin Moreland helped balance the creative freedom with the ticking clock. The first day on set turned into one of those unexpected Chicago days that was freezing and raining, despite a weather forecast of warm temps and clear skies. Our crew pulled tarps and cars and helped provide shelter for equipment and us as actors to enable us to keep shooting. There was also a day 3/4 of the way through production that we realized we weren’t going to be able to get almost a full chunk of scenes for episode 3. I don’t think we slept for two nights, doing re-writes and shot listing on the spot to try and piece meal together as much of the story as we could. Lucky for us we were blessed with the talents of editor Clare Cooney, who took what we gave her and made it a cohesive story. Although these challenges were dramatic in the moment, it was grounding knowing we had a team who was behind us every step of the way.”

BETA also boasts a guest appearance by CHICAGO P.D. fan favorite Patrick John Flueger, who plays “Adam Ruzek” in the long-running ratings king for NBC. Flueger landed in BETA in the curious role of “Chad,” and you’ll have to click here to watch the series and see how he weaves his way into the entertaining relationship webs of BETA.

BETA will continue to build its audience online and across the country as the festival circuit reloads in 2021. Whether on the web or in person, the goal for BETA is the same. “Inspiring more women to shine in tech, own their unique way of leading and empower each other as they rise, BETA the series seeks to help women process a challenging cultural landscape through a relatable, character driven comedy,” co-creator Leonard told SCREEN. “We are changing the story about who and what is “worth” investment by highlighting the importance of women’s leadership contributions & finally giving the world a story that hasn’t been told in mainstream media. BETA is an opportunity for upcoming generations of women to envision themselves leading in entrepreneurial ventures and being change makers in industries as massive as technology. It not only tells them ‘we value you,’ it tells them ‘we need you.’ As we know, change starts with stories and we are coding HER future… the future… with the stories of today.”

Click here to enjoy the full first season at betatheseries.com.