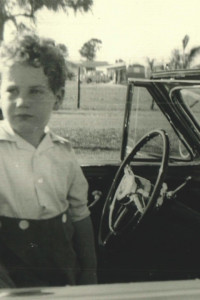 In a series of autobiographical stories spanning more than 40 years, Gifford chronicled the adventures of Roy, a boy coming of age on the gritty streets of 1950s Chicago. This documentary looks back at those adventures with excerpts from the Roy stories narrated by Willem Dafoe, Matt Dillon, and Lili Taylor.

Glasgow Film Festival Co-director Allan Hunter calls ROY’S WORLD, “a really beguiling film,” adding, “All the footage of wintry Chicago is great and I loved the animation as well. It reminds me at times of the work of Terence Davies and his documentary OF TIME AND THE CITY.”

SCREEN: Five years after your first film PAUSE OF THE CLOCK, you’re premiering your second. As a filmmaker, what interested you in this project?

ROB: For a long time now I’ve wanted to make a film that’s really about Chicago. So that was in the back of my mind. Then, about four years ago, Barry Gifford sent me a brand new Roy story with a note that said, “Here’s your next film.” I was so honored. But to be honest, at the same time, try as I might, I couldn’t find a way to make it work cinematically. As a fictional narrative. Eventually, in my supreme naivety, I said, I know, I’ll just make a documentary instead. It’ll be easier. Boy, did I learn a few things.

SCREEN: Why do you think it was important for you to tell Barry Gifford’s story now?

ROB: Barry is really one of the all-time great American storytellers. His prose is lean, direct, and yet still mysterious. It still amazes me how a three-page story of his can pack in so much power. He’s one of a handful of writers that have personally changed the way I view the craft of storytelling. But Chicago isn’t very good at honoring its writers. Certainly not while they’re alive. Take Nelson Algren, for instance. This documentary is my way of doing that. Also, that period is really slipping away from us. It’s sort of now or never. So the time was just right for it.

SCREEN: This documentary highlights 1950’s Chicago. What do you think has changed the most about Chicago and the least from then and now?

ROB: Well, we’re certainly still talking about municipal corruption, aren’t we? When the whole Eddie Johnson scandal was going down I just had to laugh. The whole setup feels like it’s right out of a story that Barry could have written. Same as it ever was. Also, another thing that hasn’t changed much is the racism of that time. It may have assumed some new guises, but it’s still with us, no question. On the other hand, what’s really changed is how the kids who live in Chicago actually grow up. I mean, when Barry was a kid he was roaming all over the place without much parental supervision. Taking the L, playing baseball games in every part of the city, sneaking into jazz clubs. Parents just weren’t as terrified by the thought of their child exploring Chicago on their own. It really was a city of neighborhoods. Almost provincial in that way, despite the fact it was America’s second-largest city.

SCREEN: In one of the excerpts, it quotes Hemingway “Don’t ignore the weather.” What role did Chicago winters play in this film?

ROB: There’s a priceless moment in the film where Barry recounts a conversation he once overheard on Clark Street, between a newsie and an old woman. She says something like, “Oh, my son just moved to Florida.” And the newsie says “Ah, I see.” Then she adds, “Yeah. He’s not like us. Not tough enough.” Those months of bad weather help breed a somewhat cynical attitude. Then as now! I think for Barry as a kid, growing up with a certain familiarity with harsh winters, he might have seen a lot more movies as a result, and he has always credited his voracious appetite for movies as part of his storytelling education. If the weather is perfect all the time it’s just not much of an inspiration for art. While I was researching visuals for the film, I kept my eyes peeled for as much footage of snow and rain and crummy weather as I could get my hands on.

SCREEN: What do you think people will take away from ROY’S WORLD?

ROB: My hope is that afterwards, they will genuinely feel like they’ve had a taste of what living in that time and place was really like. That they’ve experienced a slightly new way of seeing that history. And it would be even better if they find they have a deep craving to listen to some jazz and read more of Barry’s stuff.

SCREEN: What does this world premiere at Glasgow Film Festival mean to you?

ROB: It’s funny but many times I’ve heard Glasgow compared to Chicago, its earthiness and no-nonsense perspective. So it sounds like the perfect place for us to premiere the film! It’s just so amazing that an audience halfway around the world is going to be the first to see it. And my producer Michael Glover Smith (director of MERCURY IN RETROGRADE) and I are both thrilled to visit because neither of us has ever been before. The co-director of the Glasgow Film Festival, Allan Hunter, told me after he watched my film that it reminded him of Terrence Davies. That just thrilled me to my soul. Beyond that, I’m hoping that by having our movie premiere in Glasgow, it’ll cause more people stateside to take notice–like, what’s this peculiar Chicago movie all about?

The documentary is also an Official Selection of the 6th Manchester Film Festival, screening March 10, and SF DocFest, which runs June 4 – 18. Click here for more from ROY’S WORLD.