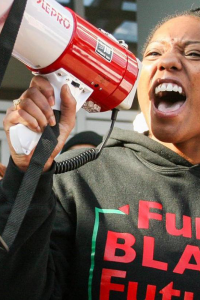 WORLD PREMIERE SET FOR UNAPOLOGETIC: Kartemquin Films is excited to announce the world premiere of Ashley O’Shay’s debut feature UNAPOLOGETIC on opening night at the 9th Annual Blackstar Film Festival on August 20th. A deep view into the Movement for Black Lives in Chicago, the film is told through the lens of two fierce abolitionist organizers confronting an administration complicit in violence against its Black residents. Click here for your tickets to the World Premiere.

YOU GOTTA REPRESENT: Kartemquin and Chicago-based distributor Music Box Films Hillary Bachelder’s debut feature REPRESENT to virtual cinemas in August. The film’s theatrical run will coincide with the 100th anniversary of the passage of the 19th Amendment, guaranteeing no discrimination on the basis of gender in determining the constitutional right to vote. REPRESENT follows three women in the American Midwest confronting entrenched political systems in their campaigns for elected office and fighting to reshape local politics on their own terms. Here is your first look at the film:

WISH GRANTED: Maria Finitzo’s THE DILEMMA OF DESIRE was selected as one of four Project:Hatched grantees specifically for filmmaker whose premieres have been affected by festival changes. The film most recently screened at Hot Docs and AFI DOCS, being called by IndieWire “alternately very funny and intensely informational… goes beyond just questions of art, science, and representation (like that’s not already enough), offering a full spectrum look at how ignoring anatomy feeds into all corners of existence. By its end, good luck not being suddenly, immensely cliterate.”

For SCREEN’s exclusive interview with Maria Finitzo on THE DILEMMA OF DESIRE, click here.

HOT TOPIC: In the summer of 1995, Chicago experienced an unthinkable disaster, when extremely high humidity and a layer of heat-retaining pollution drove the heat index up to more than 126 degrees. To commemorate the 25th anniversary of the most traumatic heatwave in U.S. history, PBS has made the film COOKED: SURVIVAL BY ZIP CODE available to stream for free for the remainder of the year. Click here to watch now.