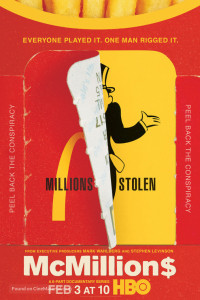 Nearly 20 years after the scandal, the story is finally out about the $24 million McDonald’s Monopoly fraud.

“We’re just happy somebody told the story,” an FBI spokesman said, at the Chicago premiere of the six-part HBO documentary series, MCMILLIONS, which is now streaming at HBO.com

You learn very quickly in McMillions, that the FBI’s job is a lot of waiting and listening, much like what happened when making this documentary. When the 12 year fraud finally went to trial, the indictments, which included over 50 people, were August 2001 and the initial appearance was September 10, 2001. And then 9/11 happened.

Thankfully, the story is everything but boring. In fact, it’s laugh-out-loud funny as the series unravels one interview at a time how an ex-cop, “Uncle Jerry,” defrauded the hugely popular McDonald’s Monopoly game one million dollar prize at a time from 1989-2001. The deception, which started among family and friends, soon expanded to include a cast of shifty ex-cons with ties to the mafia and unsuspecting co-conspirators.

One tip left at the Jacksonville FBI led to a full investigation around the question, “Who is Uncle Jerry?” Surprisingly, the executives at McDonald’s were also stunned when they learned of the fraud.

“I was utterly shocked. How in the world could this have happened and more importantly, was anyone from McDonald’s a part of this?” asks Rob Holm, McDonald’s Director of Global Security.

For the premiere, filmmakers, Chicago-born James Lee Hernandez and co-director Brian Lazarte answered a few questions from a private screening with HBO in Chicago.

“The FBI and US Government were the first entities on board with this film project,” Lazarte shared.

“If you saw our office it looked like that scene in ‘A Beautiful Mind’ where every inch of free wall space was filled with ideas, notes, and connected string from this person to this person,” Hernandez said.

What surprised some audience members was how colorful and open the interviews were. Everything from calling out family members to calling their jobs boring were divulged in this comical unraveling of a serious crime.

“The story was unfolding as we talked to each individual person so much that it was originally going to be five episodes, but was expanded into six,” Lazarte shared.

The filmmakers shared that they got to have a little fun with this documentary because of the subject matter – it was a true crime documentary on scheming a game, not about a murder, after all.

One of the key parts of this series was getting McDonald’s onboard about the documentary, which they called “a trust building experience.”

“Look, we know that there’s a policy that says if someone reaches out about a documentary, say ‘no.’” Lazarte said about his initial conversation. They went to McDonald’s Headquarters in Chicago to meet with the executives to let them know about what they were doing. One thing that the filmmakers understood was that “McDonald’s had a massive target on them” about this case even though the scam happened with the marketing firm, Simon Marketing, that they hired, not with McDonald’s itself.

There’s a companion podcast on Spotify and YouTube with each episode to talk about more behind the scenes and additional information about the case. Here’s the first episode:

McMillions had its world premiere in the Special Events section of the 2020 Sundance Film Festival. It is now streaming on HBO with a new episode every Monday.