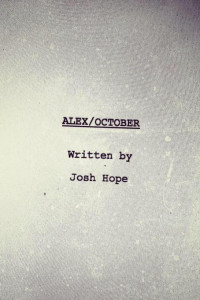 In ALEX/OCTOBER, a sad man and a bored girl form an unusual relationship after a bizarre online classified ad brings their chaotic lives together. The dramatic feature filmed in Chicago and Countryside, IL in late 2019 and is now primed for its festival run, which is expected to kick off this fall.

Hope has assembled a decorated cast and crew for ALEX/OCTOBER. Best known as “Carl Gallagher” on the popular Showtime series SHAMELESS, Chicago native Ethan Cutkosky plays October’s best friend “Josh” in this feature. The cast is led by Brad Hunt (MAGNOLIA, THE BRIDGE) and Tara Shayne (GREY’S ANATOMY, CRIMINAL MINDS), who plays the central role of “October” and is also serving as a producer on the film. Supporting cast includes Chicago actors Rivkah Reyes, Lisa Zane, Stacy Edwards, and up and coming local young actress, Sophie Leonard. Brittani Ward headed up casting and is also on board as co-producer.

Check back here at Screen for ALEX/OCTOBER World Premiere announcement and festival updates later this year.