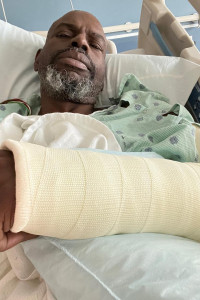 The Chicago and Illinois production world was stunned when one of the cornerstones of its community, Chicago Film Office director Kwame Amoaku was beaten, robbed, and hospitalized, but there is a shred of positive news here. Chicago police have located and released video related to the brutal attack and robbery of Kwame Amoaku, the director of the Chicago Film Office, along with surveillance images of the alleged offenders.

Amoaku posted very succinctly on his Facebook this afternoon, “Take these kids off the streets before they hurt someone else.”

Anyone who has information about the crime or the suspects can contact Area Four detectives at 312-746-8251. The case number is JF-191078, according to CWBChicago.

Here is the video released by Chicago Police…

Three males attacked Amoaku after he found them rummaging through his car near his home around 7:46 a.m. last Wednesday, according to a CPD report. He confronted the intruders, and they began beating him with “various objects,” a CPD spokesperson told local publication CWBChicago over the weekend. The group then fled in a gray Dodge Caravan that was waiting nearby.

The crew that beat and robbed the director of the Chicago Film Office later went on a shopping spree at North Riverside Park Mall, as represented in the photos and videos above.

Kwame on the Road to Recovery

As for Kwame, the longtime anchor of the Chicago production community posted on his Facebook, “I’m still here thanks to God’s Grace and Mercy. I love you all thanks for the support for me and my family. I’m gonna get through this with the love and support from you all.”

Please consider sharing the photos of these criminals in hopes the Chicago police can, as Kwame said it best, “take these kids off the streets before they hurt someone else.”