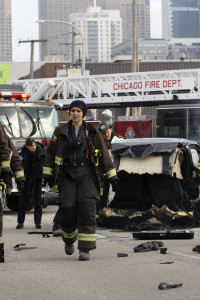 So what can you expect from this trio of Windy City heroes this Wednesday night? Here is a quick rundown of the new episodes set to premiere.

“If You Love Someone, Set Them Free” is the title of Episode 17 of Chicago Med, set to debut Wednesday, April 6th, at 7 p.m. Central, to kick off the highly popular #OneChicago lineup. Here’s the official synopsis: Rival gangs bring their war to Med. Will and Charles work with a teenage brain cancer patient who’s refusing treatment. Tensions run high in the OR when a patient’s transplanted uterus fails, forcing Crockett and Blake to decide whether to try another transplant using a uterus from the patient’s sister.

Here’s the official synopsis for Wednesday night’s new episode of Chicago Fire at 8 p.m. Central, entitled “Keep You Safe”… Severide and Kidd work with CPD regarding a suspicious car wreck. Hawkins and Violet’s relationship is in jeopardy. Chloe and Cruz adjust to a new family dynamic.

OneChicago Wednesday wraps up with the 9 p.m. Central brand new episode of Chicago P.D. Here’s the official synopsis: Ruzek’s search for the daughter of an old family friend leads the team into a serious drug investigation. Burgess and Ruzek struggle to move on from the emotional aftermath of Makayla’s abduction.