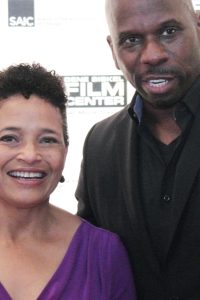 The Black Harvest Film Festival shines a stunning spotlight on Black voices from across the country and around the globe, with the month-long festival running through December 2nd at the Gene Siskel Film Center. There is much more ahead for you to enjoy, including the Closing Night screening of Spike Lee’s classic Jungle Fever in 35 mm, the “Made in Chicago” shorts program, and an inspiring retrospective of Shaft director and visionary filmmaker, Gordon Parks. But let’s leap into the crowd and see what has audiences buzzing so far…

Jean de St. Aubin: “This year’s festival really takes a look at the past and the future,” says Siskel Film Center Executive Director Jean de St. Aubin. “We’re doing a retrospective to Gordon Parks, we’re ending with Jungle Fever and we’re doing a tribute screening to Melvin Van Peebles.” St. Aubin was happy to report that the number and quality of film submissions have also increased. “We also have a great program of made-in-Chicago shorts and a Chicago-made feature about hip-hop music called It’s Different in Chicago by David Weathersby,” she adds.

LeeAnn Trotter: As Entertainment Reporter for NBC5, Chicago media personality LeeAnn Trotter had the chance to see the Dionne Warwick documentary Don’t Make Me Over before its premiere at the Siskel. Still, she was happy to give it another whirl. “It’s beautiful. It’s wonderful and it just feels good to be back with people socializing,” she says. Trotter also introduced the film and hosted a post-screening Q&A with Ms. Warwick herself. “I had forgotten (Dionne Warwick’s) impact with the AIDS community and working with the LGBTQ folks,” she adds. “She did something amazing with some of the hip-hop artists, Snoop Dogg and some other people. She went in and took care of some business.”

Kwame Amoaku: “Any time I get a chance to check out beautiful cinema done by Black people here in the city of Chicago, I think it’s a wonderful opportunity,” says Kwame Amoaku, Director of the Chicago Film Office. Regarding the opening night presentation of Dionne Warwick: Don’t Make Me Over, he adds, “I know (Dionne is) a dynamic personality and I’m really interested to see behind the veil and give her a chance to tell her story.” In addition to patronizing the Siskel Center and Black Harvest, Amoaku supports several organizations working towards a “renaissance for filmmaking from people that come from underserved areas here in the city.” Among them are Free Spirit Media, Chicago Open Television Network, Marwen, Mezcla, and Sisters in Cinema. And when it comes to relaxing in front of the TV, he cannot resist a certain Chicago classic. “I’m actually a sucker for The Blues Brothers,” Amoaku says. “If I’m flipping through channels and it’s on, then I’m locked in, and I gotta see the whole thing.”

Vivienne Bailey: Vivienne, who has been volunteering for the festival for “about 13 years,” not only loves Dionne Warwick but also considers Don’t Make Me Over director David Wooley to be “amazing.” Besides the opening night film, she intends to see a lot of locally-made features and shorts because, she says, “it’s great that we highlight a lot of Chicago filmmakers.”

L’Soft: As an Associate Programmer for the Black Harvest Film Festival, L’Soft shared the curatorial burden of whittling hundreds of submissions down to 36 shorts. L’Soft has handled similar tasks for the likes of Black Cinema House, the DuSable Museum, and Concerned Black Image Makers, a lens-based artist collective that they co-manage. “The art validates me as a person,” says L’Soft. “As a programmer, the biggest joy I get is watching audiences react to a piece and then having a conversation about it.”

According to the programmer, all of the shorts screening online for this year’s Black Harvest are good, but there are a few standouts. Mild Sauce is a mockumentary about a once-prominent Chicago-based R&B group from the 90s. Switchin’ is an avant-garde piece about “how Black people have to code-switch in the presence of white people.” “Anywhere there’s white hegemonic culture present, the feeling that we have to alter our language, our gestures, our very state of being to make white people more comfortable,” says L’Soft. “We feel pressured to shrink ourselves.”

Wilda Belk & Kim Furganson: “It seems like I’ve known Dionne Warwick forever,” says Chicagoan Wilda Belk. “I’m interested in really seeing her story on film. I think it’s just the uniqueness of her voice and her whole style. Nobody can copy that.” Kim Furganson attended the premiere partly as a tribute to her father. “He was a huge Dionne Warwick fan,” she says. “In fact, he named me after her: that’s my middle name.” Still, the apple doesn’t fall far from the tree. “I love Dionne Warwick. I think she’s a wonderful singer, but people forget that she’s a musician too. This woman plays piano. She’s classically trained. I really think she deserves to be in the Rock Hall. Not because she’s rock, but if it wasn’t for her we wouldn’t have singers like Whitney Houston, Celine Dion. I mean, like, these really classy singers. The sound with her and Burt Bacharach was just wonderful.”

Dionne Nicole Smith and Pemon Rami: Dionne is the former Director of Development at Gene Siskel and the current director of development for IMD Guest House, which provides housing for people of all ages undergoing treatment in Chicago hospitals. “My parents named me after (Dionne Warwick) because they were music educators and they grew up as individuals who respected all forms of music, and there was something special about her from day one. So for me to be named after her, I feel very honored. She was classically talented. She was her own person. She has her own voice. There’s no one who sounds like Dionne Warwick. No one. That’s the type of legacy or light that you want to leave in this world. Someone who is individually their own unique entity, and that’s who she is for me. I would love to meet her just to say, ‘I was named after you, Dionne.’”

Pemon Rami is a film industry veteran who broke into the business as a casting assistant for The Blues Brothers. Currently producing and consulting on projects around the world, he also serves on the Black Harvest Film Festival jury, which means that he got to see Don’t Make Me Over before everyone else. “It’s an incredible piece,” he says. Although he has met Ms. Warwick on several occasions and has “always appreciated her as a singer,” the film helped him get to know her even more. “I was more impressed with her after seeing it. It’s amazing. Her relationship with the hip-hop community is worth people seeing it. And what she did with them, it was just extremely impressive. It’s exceptionally well done.” Besides enjoying Don’t Make Me Over for a second time, in the Siskel Film Center no less, he was excited to emerge from the pandemic rut that’s been affecting the whole community. “Not only do you miss the films, but you miss all the wonderful people that show up.”

Harold Dennis: “Dionne is a legend,” says Harold, an actor, Second City instructor, and member of the Black Harvest Community Council. “I mean, she was doing her protesting back in the 60s. She was always that woman. She has a plethora of music and she’s a phenomenal person.”

Acasia, Andre and Ariella Gibson: Songwriter and composer Andre Gibson attended the screening with his daughters Acasia, a PR executive, and Ariella, Communications Coordinator at the Chicago Loop Alliance. “I’ve always loved Dionne Warwick,” he says. “I’m a music major in high school and college, so orchestration and arranging was my forté.” His favorite parts included “seeing all of that footage going back years and years and years and remembering the Regal Theater and the Chicago Theater and Chuck Jackson and all of those artists.” Although his daughters describe themselves as “GenZ Millennials” who “mostly knew (Dionne) as Whitney Houston’s cousin,” they were thrilled by the music. “So many more songs than I thought,” says Ariella.

For my exclusive interview with Dave Wooley, the director of the Dionne documentary that has Black Harvest Film Festival attendees buzzing, you can click right here.