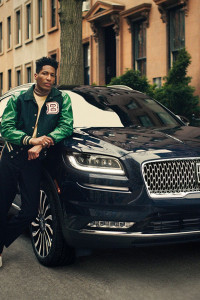 It’s time to find your happy! Grammy nominee Jon Batiste will have you singing and dancing out of your seat at the office today. The talented artist is at the heart of the latest spot for Lincoln, which was brought to the screen by a team that included agency Hudson Rouge, superb sound house Yessian Music, and many more. Put on your dancing shoes and let’s take a look…

“Ivory Keys” was conceived as a concept by the team at Hudson Rouge in New York as a physical representation of the moment of inspiration, in a way that would feature and utilize the talents of their musical brand ambassador, Jon Batiste. The spot was filmed and edited early this year specifically to air on the Grammy’s earlier this month.

The team at Yessian was involved early in the process since the music track integration was a key component of the film. “Our creative approach began with a number of rough musical sketches prior to the filming and final choreography to explore possible editorial options and to assure the agency team, the director and Jon (along with his choreographer Jamel Williams), that Jon’s song would be adaptable in way that followed the arc of the story while still maintaining the creative integrity of his original composition,” Yessian Managing Director and Executive Producer Marlene Bartos told SCREEN.

“The first & most important aspect as always is to listen and study what everyone wants. What’s the ask, the goal,” Yessian Music Mixer and Executive Producer Gerard Smerek told SCREEN. “Next is getting the artist comfortable. There has to be an atmosphere of confidence. They have to know their craft & their music is protected. This is the outside frame. From that point you can stop thinking and fall into the inside frame. The melody and rhythm the cinematography and the flow of the editors work and how it all comes together. The song will tell you what it wants. Sometimes it shouts and sometime it’s a subtle whisper. You can never stop listening.”

Yessian’s greatest challenge with “Ivory Keys” was “to preserve the natural creative spontaneity of Jon while at the same time hitting on all the expectations for the client. The ultimate goal is always to trigger an experience for the audience. This is what makes them remember you,” EP Smerek explained to SCREEN

In the end, what makes this spot special and memorable is the way “Jon’s unique spontaneity and love for music pours out of him. He is a true artist in every way,” concluded Smerek.