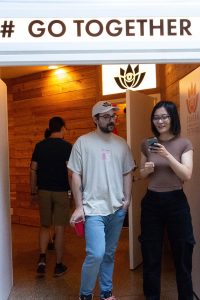 Camera Ambassador recently hosted its Cam Jam at its Studio, and SCREEN has some fabulous photos for you. The soiree offered the opportunity to unwind with other filmmakers, creatives, and gear heads while relaxing with a cold brew or two. Camera Ambassador Owner Erica Duffy and her team welcomed filmmakers to their HQ at 2425 West 14th Street in Chicago on June 28th for the festivities.

Here are some photos from the social gathering, courtesy of Camera Ambassador…

Founded in 2014 by Erica Duffy, Camera Ambassador is one of only three equipment rental houses nationwide owned and operated by a woman. Her vision was to create a vibrant community of artists by providing high-quality film equipment and top-notch service paired with genuine support for their productions. Camera Ambassador is a one-stop shop, carrying everything from cameras and lenses to grip trucks and production supplies. Their equipment roster includes high-end brands such as Arri, Red, Canon, Cooke, Zeiss, O’Connor, Small HD, and Teradek, with specialty items such as anamorphic lenses, gimbals, and grip trucks.