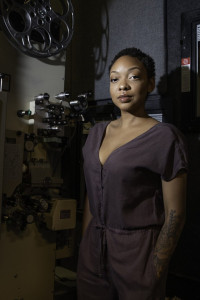 Zanah Thirus’ flair for effectively producing 21st-century films is how successful filmmakers build their careers. At film conference Q&A sessions and even on peer-to-peer calls, the conversations heavily revolve around funding. Her creation, The Microbudget Indie Filmmaker’s Podcast, answers many, if not all, concerns producers and directors have during the filmmaking process. Covering an array of topics from Episode 1: The 10 Commandments of Microbudget Filmmaking to Episode 14: Pandemic Production, the listener will quickly realize how she landed the honor of being dubbed the Micro-Budget Queen. Sincere and helpful while being effortless in the same vein, her podcast can assist seasoned industry professionals or serve as a pillar for those who have yet to put skin in the game.

Making her sophomore appearance on the Screen Magazine platform with her comedy, The Love You Want Exists, the Queen of micro-budget films has provided another supreme example of how money should not hinder producing exceptionally thoughtful work. Amid a wavering economic shift, which has created a continuously layering myriad of difficulties, Zanah wrote, produced, directed, and is in the process of completing her whimsical tour de force shot in Georgia. Implementing her financial strategy while modeling hazmat-chic gear, she safely directed the multifarious leads, Chantal Maurice and Jason C. Louder. Traveling from Chicago to Atlanta during a pandemic may seem like an impossible line item on any budget, but when you are the Queen, the possibilities are boundless.

“I like telling stories where two things can be true,” Thirus told SCREEN. “I like showing that a lot of the existence of Black people, especially Black women is not in a vacuum.” Here is your first look at The Love You Want Exists:

The Love You Want Exists – Trailer from Zanah Thirus on Vimeo.

In this season of basking in the bliss of finalizing ceremony dates, receiving an invite to be a bridesmaid, and madden names hyphenated or dropped entirely, just like love, Zanah’s film is in the air. The Love You Want Exists will add depth to what it means to be an African-American while also uncovering the patriarchal undertones of weddings, which have strengthened under the veil of being drunk in love. Sobering audiences will take a musing dive into the meaning behind traditions in the westernized wedding world. Her film will add balance to the ideologies through alternatives. These are two accomplishments the larger film community has yet to address. The production also fills in historical gaps then lays out the strength of a patriarchal system when people follow instead of making informed decisions. “Social change is the goal of every one of my films: whether documentary, comedy or narrative.” Her introspective thoughts as a writer are currently undergoing the post-production process in the editing bay and will undoubtedly shine through the performances.

By the end of any film, viewers have an opportunity to share their eagerness to continue the conversation started by the filmmaker. The Love You Want Exists will be no different, giving an intriguing yet stable picture of the African-American community. The film creates a space for viewers to open their hearts to discover, then challenge other unhealthy traditions and spend time envisioning their lives when uninhibited love has its chance.

The Team Behind This Microbudget Triumph

Thirus assembled a strong team behind her for this project. Executive Producer Bill Bossert reached out to Zanah on Twitter and asked to donate to the project, subsequently funding 75% of the $5600 budget. Thirus produced the short with Michael Chris, bringing together a crew that included Cinematographer Blake Bodden, Assistant Director Versus Smith, Production Designer Trina M. Wilson, Assistant Camera Corey Lightener and Sound Op Jacob A. Wasden. The post production team was led by Editor Sam Powell, with Colour Grade by Oisin O’Driscoll and Sound Mix by Batsirayi Zesaguli.

Up Next for Zanah Thirus

Looking ahead, Thirus remains dedicated to keeping viewers focused on topics of substance and continuing social justice conversations. She also has a documentary project in the works. Joining historians, experts on the Bible’s translation, and providing context, “liberation” is a word that describes her upcoming documentary, Daughter of Eve.

Screen Magazine Correspondent Alexandra M. Hunter is an eloquent voice of the millennial generation – inspiring hope, energizing purpose, actualizing change, and empowering visionaries for success in the entertainment industry. As an actress, she assists experts, students, and leaders to communicate their philosophies through the mediums of stage, radio, and screen. More from Alexandra at alexandramhunter.com