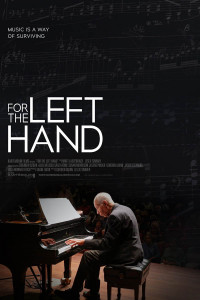 Are you ready to be inspired? The next project from two Oscar-nominated cornerstones of the Chicago documentary is here. Diane Quon, producer of Best Documentary Nominee Minding the Gap, and Kartemquin Co-Founder Gordon Quinn, whose career includes Oscar nominations for Edith + Eddie, Abacus: Small Enough to Jail, and the aforementioned Minding the Gap, are among the acclaimed team bringing the inspiring story of Norman Malone to the screen in the new documentary feature The Left Hand.

The Left Hand will make its Chicago Premiere at the 57th Chicago International Film Festival on October 17th at the Gene Siskel Film Center. Quon is producing the film, while Quinn is co-directing with Kartemquin’s award-winning Director of Editing, Leslie Simmer, who has helped anchor the acclaimed Chicago-based production house since 1997.

Your First Look at This Inspiring Documentary

When aspiring Chicago pianist Norman Malone was just 10-years-old, his father violently attacked him with a hammer, leaving the young virtuoso paralyzed on his right side. But Malone never gave up his passion for music, and, for decades, he pursued a mastery of the piano using only his left hand. Venerable Chicago filmmakers and Festival veterans Quinn and Simmer recount Malone’s remarkable and inspiring story and chronicle his preparations to publicly perform for the first time – at age 78 – Ravel’s Piano Concerto for the Left Hand.

Here is your first look at the film. Enjoy the musically mesmerizing trailer for The Left Hand:

You can enjoy the Chicago Premiere of The Left Hand in person on Sunday October 17th at 12 pm Central, at the Gene Siskel Film Center, with pianist Malone and the filmmakers in attendance. If you’re more of a homebody these days, the film will also be available for streaming in the Midwest region from October 14-24.

Check back here at SCREEN for updates as this unique and inspiring film forges ahead on its festival run.