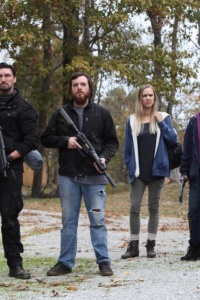 While it may feel like the end of times, we sat down with Chip Rossetti, writer and director of “The Dark,” a post-apocalyptic mini-series produced by Chicago production company, Questar, about how he got his inspiration and what we can expect from this new release as it wraps post-production.

AMANDA: What inspired you to write THE DARK?

CHIP: I always say that I am just a scribe. God tells me what He wants me to do and I just write it. In the case of THE DARK, I think it was the fact that I was seeing a lot of End of Times things coming out in the Christian and Faith Based genres, but I didn’t really like the way it was being depicted. It seemed that these shows and movies were being “sugar coated” when it came to what the End of Times is going to be like.

I wanted to do something that was more along the line of the “Hell on Earth” that I truly believe it is going to be. The character in The Dark are real. They are flawed, imperfect beings that find themselves doubting themselves, and even doubting their Faith, at times. I think, in the situations that they find themselves in in The Dark, doubt is something that people are truly going to face. The idea that the world around them has completely collapsed, and the Anti-Christ is in control is a terrifying idea, and I just hope and pray that we are not here to experience it.

Here is your first look at THE DARK:

AMANDA: What is the overall message of THE DARK?

CHIP: It depicts what the world is going to be like, especially for Christians, at the End of Times, during the Tribulation, before Jesus comes back. It really is a way of telling people that they need to get their “house in order” before we have to face this terror. That’s what it’s going to be, a terror. And there is now way around it. It’s going to happen. It’s been prophesized in the Bible. The only question is how prepared are you going to be when it does happen. It’s not if, but when.

AMANDA: How did you work on the look and setting of this film?

CHIP: I did a lot of research. I read a lot of books about the End of Times, and post-apocalyptic scenarios, and then I created a story and interjected our characters into it. We definitely wanted to shoot in the winter, as we wanted to really showcase the stark landscape that I think will be the world around us at the End of Times.

Believe it or not, I watched a lot of The Walking Dead when I was doing my research. Not because of the zombies, but because of the settings, and the idea that people are going to be fighting for survival.

All of the things that we have in life, right now, that we take for granted, are going to be gone. That’s a sobering thought, but it is also the reality of the situation. I also understood that there were few definitives in terms of what the End of Times is going to actually look like, so it gave us some creative liberties when it came to the story.

AMANDA: What’s the biggest challenge of filming an end of times film as an independent filmmaker?

CHIP: Obviously, we have limited time and resources to make THE DARK. We shot for 23 days for a 5 part mini-series. We had to deal with the weather on a number of occasions and we were forced to change some of our scheduling because of it. That’s just the reality of shooting in the winter.

We also had to deal with the fact that, with a number of our locations, we didn’t have the luxury of being able to close them down while we were shooting, so we had to work around them. For example, we shot for 3 days in a junk yard. They were still open while we were shooting, so we have to work around cars being scrapped and a lot of noise. We also have to deal with traffic noise a lot. In our story, there are no working vehicles, so we couldn’t pass that off. We had to shoot and reshoot because of the traffic in the background. On larger productions, locations can be bought out for a few days, and roads can be closed so there’s no traffic. As an Independent film, we just have to learn to work around those obstacles.

AMANDA: What was it like working with Kevin Sizemore (best known as “Anthony” in FEAR THE WALKING DEAD) and how did you choose him as the lead?

CHIP: Kevin was great. What attracted him to the project, initially, was that the characters felt real. Real, flawed, imperfect people, trying to survive in a very inhospitable world.

He actually read the first few scripts a couple of years ago and immediately fell in love with the project, but timing was an issue. When we realized that we were going to be able to make it work, within both of our parameters, it was a no brainer to bring him in in the role of Peter Braxton.

AMANDA: What other projects are you working on?

CHIP: Wow. We have a lot of things going on right now. We are finishing post-production on The Dark. We recently wrapped production, and are currently in post, on a spinoff of THE DARK called “The Dark: Forever Winter”. We have another spinoff that we are currently working on called “The Dark: Days of Want”. We are also preparing to shoot more of our hit series, “The Dream Motel.” We have been very blessed to be able to continue to tell these great stories, and we have a lot more on the horizon.