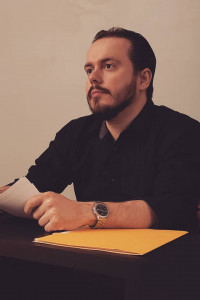 A Chicago filmmaker has a new pilot, it’s winning awards, and it’s here for you to watch right now. SCREEN brings you an exclusive chat with Sonny Kruger, creator of the comedy A Series About a Series, which just earned Best Comedy and Best Director laurels at the Nicomedia Film Awards earlier this Spring. Let’s chat with Sonny and take a look at the pilot, which filmed in the Chicago and Arlington Heights areas of Illinois…

“This is a story about people working towards their dreams, whether it be an actor, actress, writer, or first-time director,” Kruger shared with SCREEN. “Although there are quite a few laughs, there are serious issues shown in the story as well, like mental health issues and learning to accept others from different walks of life.”

In A Series About a Series, Buck Banderas is a writer trying to make his first series. He quickly finds out that he has a lot to learn and will have to change some of his ways and thinking if he wants to make his passion project happen. Although Buck battles with mental health issues that sometimes land him in trouble, he generally has a good heart and wants to do the right thing. Even though he may sometimes use his work to impress the ladies, when the time comes to get down to it, Buck puts his everything into the pilot he is trying to make.

“This is the first time I am taking one of my stories and turning them into an actual show like I’ve always dreamt of doing,” Kruger shared with SCREEN. “Although there have been many challenges, I’ve loved the process and have worked with and had support from so many great people. It’s one of those ‘Art imitating life, Life imitating art’ kind of things. In the show, Buck Banderas is a writer trying to make his first show, and in real life, I am a writer making my first show.”

Kruger plans to film the entire series in the Chicagoland area. As for what lies ahead with the project, Kruger and his team are working on the next several episodes this Summer, and continuing their run on the festival circuit.

Check back here at SCREEN for updates on this and other pilots in production and in development. You can also click right here to subscribe to our weekly email newsletter.