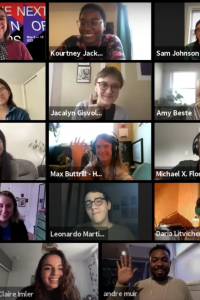 CineYouth Festival, presented by Cinema/Chicago, announced award winners for its expanded 2021 edition, comprising films accepted for the pandemic-preempted 2020 edition plus a new slate of films submitted for the 2021 festival. These include Best Drama winners She Who Wasn’t Tamed (2020) by 19-year-old Saleh Kashefi of Iran and The Pleasure of Killing Bugs (2021) by 21-year-old Leonardo Martinelli from Brazil. Best Animation went to The Quiet by 20-year-old Radheya Jegatheva of Australia. Best International was awarded to No Crying at the Dinner Table by 21-year-old Carol Nguyen of Montréal, Canada. Best Documentary went to Creciendo (Growing Up) by 21-year-old Nancy Nguyen from Los Angeles, CA.

“I’m so grateful, and it means so much, especially considering the fact that I had a high school film in the festival over five or six years ago,” said No Crying at the Dinner Table director Carol Nguyen, accepting the Best International Film award from Montréal. “It really feels like I”m circling back to the same community that’s supported me since the beginning.”

“At other traditional festivals we don’t have as much space, so we’re very thankful to have this special space to highlight films from young people,” said Leonardo Martinelli, director of The Pleasure of Killing Bugs, accepting his Best Drama award from Brazil. “Thank you for awarding our film that brings those issues that are universal, while at the same time, Brazil is in this profoundly difficult time both because of the pandemic, and in this total chaos of the political crisis as well. It is extremely important that we bring these issues to the rest of the world as a discussion and in the language of filmmaking.”

“Thank you to the CineYouth team for making this such a welcoming film festival experience in these virtual times,” said Anna Lee Ackermann, whose documentary As We Are Planted won the 2021 Chicago Award Presented By DePaul University. “I may be biased, but I think documentaries are the future. They’re evidence that everyone has a story worth telling and that your story matters.”

“For me, film is all about erasing boundaries both in space and time,” said 17-year-old director Daria Litvichenko, whose film Meeting at Half Past Five won the Rising Star Award Presented By Adobe for filmmakers 18 or younger, from her home in Estonia. “One can easily get a lot of inspiration from a piece of art which was created in a completely different country. I think that’s the goal. I thank CineYouth for bringing this group of filmmakers from different countries together and giving us an opportunity to exchange ideas. I look forward to the remaining days of the festival.”

In total, CineYouth 2021 showcased 102 films from 25 countries by filmmakers 5-22 years old over eight days. The Festival’s 14 programs of short films are available to stream for free through Thursday, May 13 via Cinema/Chicago’s viewing platforms. Award-winning films will be screened together at the 57th Chicago International Film Festival, October 13–24, 2021. Photos from CineYouth Festival are availablehere.

Led by major sponsors Adobe, DePaul University, and Hamilton Watch, and partner NFFTY, CineYouth is supported in part by a grant from the Illinois Arts Council Agency and a CityArts Grant from the City of Chicago Department of Cultural Affairs & Special Events.

Children Play With Fire carried with it the marriage of all the cinematic language elements with its story, character, poignant theme, sound, and performances.

As We Are Planted

Anna Lee Ackermann | Chicago | Age 21
As We Are Planted is an eye-opening exposé on modern food desserts, which is both fascinating to watch but also alarming and essential. Documentaries work well when they illuminate and make you think on important subjects, while not losing sight of the heart and soul of the piece. This film does that and more.

Radheya Jegatheva | Australia | Age 20
For its poignant observation in light of the past year of the duality of personal reflection and neurosis when spending too much time alone; coupled with its technical know-how, breadth and captivating storytelling.

No Fan of Andy

Kai Tomizawa | Oregon | Age 16
An hilarious exploration of the uncertainty of friendship combined with dynamic storytelling made deeper by complex characters.

For its wonderful unique energy and voice that took us to a place we’ve never been and introduced us to people that we otherwise would not have a chance to meet.

She Who Wasn’t Tamed

For its beautiful example of cinematic excellence with its look at the nature of friendship, of identity formation and self-actualization.

The Pleasure of Killing Bugs

As terrifying as it is beautiful, The Pleasure of Killing Bugs shows us what the world might look like if we fail to change our ways.

Kourtney Jackson | Canada | Age 22
The experimental jury loved the juxtaposition of Wash Days’ visuals of basic but complicated everyday rituals with the discussion of cultural conversations around hair, including ownership of one’s body, expressions of gender, and expressions of self-love and growth.

this is a completely normal home movie

Tessa Hill | Canada | Age 19
For its inventive assemblage of visual materials to create an expansive visual world; a timely indication of anxiety during these unprecedented times.

The jury found Hollow to be ambitious, sophisticated and engrossing with dread arising from the film’s use of editing, sound, and cinematography. In this eerie, self-contained world the boundaries of ordinary objects become portals to an extraordinary landscape.

No Crying at the Dinner Table

This film has touched us deeply and is a brilliant example of its genre.

Pitoc E Icinakosian exemplifies what stories are necessary to move our culture forward. Shedding light on things unseen through the lens of intimate documentation teaches us the importance of empathy and shared experience. Stories of queer indigenous people are so rarely represented yet a vital part to the LGBTQ experience.

Meeting at Half Past Five

We were all drawn to the unique stop-motion animation, and we all can’t wait to see what Daria creates next.

Claire Imler | California | Age 21
The jury was touched by Exposure’s intimate portrayal of an ICU nurse during this time. The film’s storytelling and style of the film are truly captivating.

For more information on the CineYouth Festival and to claim free tickets to watch films, visit www.chicagofilmfestival.com/cineyouth.