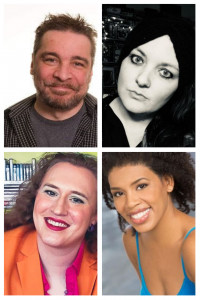 The Chicago Film Critics Association (CFCA), the Chicago-area print, online and broadcast critics group that celebrates the art of film and film criticism, released their roster for 2022-2023 today, announcing the acceptance of four new members. The new critics represent a a variety of film journalism in Chicago and bring their voices to one of the country’s longest-standing and most accomplished associations of writers.

With the annual Chicago Critics Film Festival each Spring and the CFCA Awards presented in December, the Chicago Film Critics Association is a vital and thriving organization of film journalists, critics and broadcasters influencing the film industry in Chicago and beyond.

Here are the four new critics joining the ensemble…

NICK DIGILIO (he/him) Nick has been reviewing movies professionally for over 37 years, starting on The Roy Leonard Show on WGN-AM radio in Chicago, and continuing on WGN as film critic and show host for 35 years. He has written film commentary for New City, The Reader, CineBooks, Entertainment Weekly, and served as chief Film Critic and Managing Editor of The Roy Leonard Going Out Guide magazine for over 7 years. Nick hosted the monthly “Nick D Film Club” at The AMC Rosemont Dine-In Theater for over 8 years, screening timeless favorites and modern day classics. He is currently the host of the very popular podcast: “The Nick D Podcast” for The Radio Misfits Podcast Network in which he reviews films, conducts long-form interviews, and talks about movies, pop culture and more. He is also the Film Critic for “The Steve Cochran Show” which airs weekday mornings on WLS-AM 890 in Chicago. His favorite film of all time is “Magnolia,” and he hates “Ferris Bueller’s Day Off” with every fiber of his being.

SHERI FLANDERS (she/her) Sheri Flanders is a Chicago based freelance journalist, theater critic, and comedy writer whose work has been featured on WTTW Chicago Tonight and WGN radio, and in publications including the Chicago Sun-Times, The Chicago Reader, Quill, Performink, McSweeney’s the Chicago Defender, Newcity Stage, Windy City Times, Rescripted and Chicagoland Musical Theater. Sheri has covered the Sundance Film Festival for the past three years through their Press Inclusion grant. She was the recipient of an Author’s fellowship at the Martha’s Vineyard Institute for Creative Writing, and a finalist for the 2020 Peter Lisagor Awards for journalism. Sheri has written screenplays and television specs and pilots. She is also head writer for Choice the Musical, and writes and performs as part of the sketch comedy duo FLANDERS. She is represented by NV Talent, holds a bachelors in Fashion Design, as well as any cat that will let her.

MARYA E. GATES (she/her) Marya E. Gates is a freelance film and culture writer based in Chicago. Originally from California, she studied Comparative Literature and French Literature at U.C. Berkeley and also has an overpriced and underused MFA in Film Production. She is currently writing a book on female directors for Rizzoli. Bylines include RogerEbert.com, The Playlist, Crooked Marquee, Nerdist, Moviefone, and Vulture.

B.L. PANTHER (they/them) B.L. Panther is a culture writer, scholar and Pisces from Northern Illinois. B! writes for outlets including The Spool, Honey Literary Journal and Paste Magazine. A champion hermit, they enjoy reading, the indoors, afternoon naps and doing nothing at all.

DiGilio, Flanders, Gates and Panther (pictured clockwise from top left below) join the organization’s existing membership of more than fifty film critics and journalists based in or with ongoing ties to Chicago. The full roster for 2022-2023 is available here.

Check back here at SCREEN for updates on the latest in film news in Chicago. You can also click right here to subscribe to our weekly email newsletter.