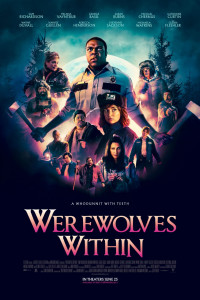 Is there anything better than a film that can make you laugh and scream at the same time? So it goes with the new horror comedy Werewolves Within, now in theaters and digital platforms worldwide. On the heels of its World Premiere, director Josh Ruben sat down with Screen’s Joanna Kay to give you an inside look at the laughs and screams of Werewolves Within…

Werewolves Within is directed by Ruben from a screenplay by Mishna Wolff, based on the video game of the same name from Red Storm Entertainment. It stars Sam Richardson, Milana Vayntrub, George Basil, Sarah Burns, Michael Chernus, Catherine Curtin, Wayne Duvall, Harvey Guillén, Rebecca Henderson, Cheyenne Jackson, Michaela Watkins, and Glenn Fleshler, and follows a group of people in a small Vermont town who get trapped in a snowstorm only to suspect one of them is a werewolf.

Click here to watch Werewolves Within tonight at home or in theaters.

Chicago! This film is playing at Landmark Theaters this week, here are showtimes.