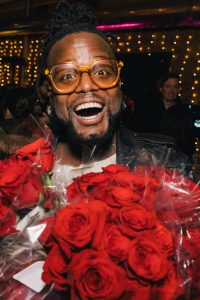 A vibrant and electric crowd descended upon downtown Chicago to celebrate the premiere of new series Wake & Bake with Dom Brown. Nearly 200 people filled event space Loft on Lake this month to enjoy a special performance from rapper (and guest on the show) Vic Mensa, a filmmaker panel led by The A.V. Club, and a viewing of the premiere episode of Wake & Bake.

SCREEN sponsored the festivities and has some exclusive pics for you right here, courtesy of photographer Matt Reeves:

The filmmaker panel featured a deep dive into the vision of Dom Brown and series director Domenic Del Carmine. Brown declared, “It was so important to represent this city and make this city-centric. From the moment that we started to create this, I’m strong on that if I’m succeeding than everyone around me needs to be succeeding, as well. And a lot of these people that approached us for other opportunities, they wanted to take our show and they wanted to be in charge of it. They wanted to produce it. They would direct it. They would choose who’s hired. They would choose the music. And this company [Cow Lamp Films] allowed us to not only pick the staff and the people that filmed it to my best friend, Orville Klein being able to make all the music for the episode to another one of my best friends, Matthew Reeves, being the on-set photographer, my good friend, Dom, being the director and producer. Like it was just endless being able to put people on because what the f*ck is the point of being on if you can’t put anyone else on. It’s Chicago over everything. And they really gave us the opportunity to do that and show that to the world.”

Director Domenic Del Carmine is a Columbia College film graduate who started his career as a producer at The A.V. Club and Onion Labs. Domenic spoke to Cow Lamp Films arising as a champion of the project: “It really took a company like Cow Lamp Films to come in and want to invest in what we had and build it up into the TV show that it is right now. Dom had a vision, we both did, but their investment allowed us to create a very high production show, take it to the next level, give us the ability to have people live Vic [Mensa] on to share his story and his perspective. And, we’re excited to show the two other episodes that we have.”

All three episodes of Wake & Bake with Dom Brown are live and free to watch on Hipstr, click here to dive in.

This year, Cow Lamp Films launched a production side to its business and started filming Wake & Bake with Dom Brown, a social equity cannabis tourism show taking viewers to the cannabis scene around the country, including Chicago, Denver and Los Angeles.

Brown closed the panel by declaring, “We don’t live in a war zone. People aren’t being bombed. That’s just not realistic. The problem is the way that Chicago is depicted and reported. It looks like this is a city full of crime when in reality it’s the city that’s full of the best DJ’s, the best artists, the best poets, the best rappers, the best comedians…it’s such a city that’s rich with culture and integrity…all the people that are implants to Chicago or some people in Chicago have this idea like in order to make it you have to move out of Chicago, you have to move to LA. But the true celebrities, the true people that make it. We understand, or they understand that if you make it in Chicago, you can make it anywhere in the f*cking world. Like once Chicago puts you on their shoulders, those big, broad shoulders, it’s game over…”

As for what we can expect from the free streaming app Hipstr going forward, Wake & Bake with Dom Brown Executive Producer Jonathan Plowman added, “Hipstr features a curated selection of very gritty, edgy content – a lot of content that you wouldn’t find on ordinary TV stations or streaming platforms. They kind of shy away from stuff. For example, Wake & Bake, it doesn’t seem socially acceptable to watch Dom having fun smoking weed even though people smoke weed everyday …we’re trying to highlight the film scene here in Chicago and help to elevate it to what we think it should be.”

All three episodes of Wake & Bake with Dom Brown are live and free to watch on Hipstr, click here and pass it around.