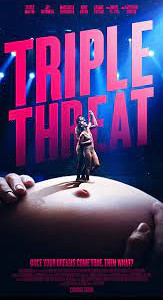 Triple Threat is leaping from its world premiere at the Cinequest Film & VR Festival to a rigorous festival run. But before the film begins its prolific roadtrip, writer-director Stacey Maltin and actor-producer Margarita Zhitnikova stopped by SCREEN to chat with Joanna Kay about their ambitious and uplifting indie film musical.

Triple Threat is brimming with millennial energy and the vibrancy of live musical theater. Written by Maltin (she/her; a native of the Bay Area), and Jay DeYonker (he/him), the two star with Margarita Zhitnikova (they/them) as longtime friends whose bond is put to the test when their dreams of Broadway stardom collide with adulthood.

Up Next for Triple Threat

To track down when Triple Threat is landing in your town, click here to keep up with the film and its road ahead!