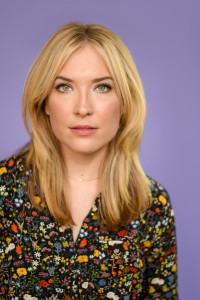 This spring, as the world looked to be emerging from the pandemic’s grip, Chicago actor and writer Alyssa Thordarson (pictured left) began thinking about the ways in which people deal with shared trauma. This led to the development of a short film called “After: A Love Story,” an intimate story of a couple trying to bridge the space that has emerged between them after surviving a violent event. Award-winning filmmaker Clare Cooney (Runner; Pick Up) came on board to direct, and the two women assembled a team of bicoastal talent to bring this story to life. Thordarson plays Edie, married to Charlie Maxwell, played by Glenn Stanton (The Walking Dead, 911, Chicago Fire), and Susaan Jamshidi (Chicago PD, Chicago Med, Sirens), plays their marriage therapist.

The team will begin principal photography on the film this weekend – August 7 and 8 – in Chicago. “It was really important to me to address how shared trauma can change people, and to do it in a way that didn’t force the audience to live in those moments of violence but rather to explore what happens in the aftermath,” says Thordarson.

“It’s more interesting to me to see how people pick up the pieces.” Says Cooney, “This is a really raw, human, grounded story, which is my favorite sort of thing to work on. We’ve got an incredibly talented cast and crew and I can’t wait to dive into this vulnerable piece together.”

Speaking of cast, “After: A Love Story” marks a return home to the Midwest for the aforementioned Glenn Stanton. Stanton is originally from Troy, Ohio, and began his career on stage in Chicago. He cut his teeth with theatres such as The Goodman, Chicago Shakespeare Theater, and House Theater, before eventually relocating to LA in 2015. He is best known for his recurring role in Chicago Fire as Jason Molina, and recently joined the cast of AMC’s The Walking Dead in the role of “Frost.”

Jason Chiu (Joe Pera Talks With You, Henry Gamble’s Birthday Party) reunites with Cooney as director of photography on this project, having previously worked together on the award-winning short film Runner. Thordarson, Cooney, Jill Oliver, and Matt Gall are producing, with We Make Movies & Mike McNamara associate producing and Divisionist Films executive producing. Gaby Labotka will serve as intimacy coordinator.

“I think people really crave these intimate stories right now, and we are really looking forward to bringing ours to life,” says Thordarson.

Check back here at Screen Magazine for updates as AFTER forges ahead into production this weekend and drives toward its festival run in the months ahead.