This Is Us writer-director Kay Oyegun has a new drama in the works for ABC, and that pilot will be heading to the Windy City. Sources tell SCREEN the pilot will be filming in Chicago from May 16th through June 3rd. Here is everything we know so far…

The untitled hourlong project comes from 20th Television and is written and executive produced by Oyegun. She has worked on the hit NBC drama This Is Us since 2016. Oyegun started on the show as a staff writer during its first season, working her way up to executive producer. Oyegun made her directorial debut on the show in the “Birth Mother” episode which aired on January 12, 2021.

What to Expect from the New Drama

Oyegun’s pilot follows five therapists who find unique ways to solve problems in their patients’ lives while grappling with their own. Ellen Roman, the owner of the practice and a brilliant therapist, has her life shockingly turned upside down when she begins working with a sociopathic patient who may hold the key to the disappearance of her sister five years earlier.

While the pilot will film in Chicago, the series appears to be set in Philadelphia. Does this mean the series would leap to Philly if picked up? Perhaps, but for now, it’s all about the pilot, and SCREEN will deliver updates as the project progresses.

All-Star Chicago Team On Board

Oyegun will have some of the premier Chicago production talent alongside her for this pilot shoot in May. Christina Varotsis will be producing the pilot. Varotsis is a cornerstone of the Chicago television production community, with recent credits including the HBO hit Lovecraft Country and the pilot for Single Drunk Female, which was picked up to series. Another Windy City stalwart is RoseMary Prodonovich, who will serve as Production Supervisor. Her recent television work includes the Amazon series Paper Girls and Season Four of Fargo. 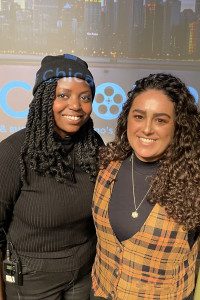